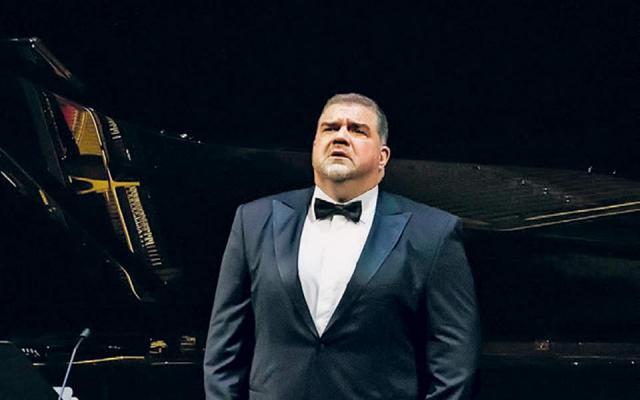 It was only a few days ago when Greek baritone Dimitri Platanias had both audience and critics spellbound by his superlative performance as “Gerard” in the premiere of Giordano’s “Andrea Chenier” at the Royal Opera House in London.
This was just the most recent triumph of the great opera singer from Kalamata who has become one of the most sought-after baritones in Europe since 2007. The list of the companies he has sung with is impressive by any measure.
Turin’s La Fenice, the Teatro Regio in Turin, Teatro del Maggio Musicale in Florence, the Hamburg State Opera and the Bavarian State Opera are just some of the renowned opera houses to have featured the baritone.
The Frankfurt Opera, the Stuttgart Opera, Teatro Real in Madrid, Palau de les Arts Reina Sofia in Valencia, La Monnaie in Brussels and the San Francisco Opera are others in which the Greek baritone has had the distinction of singing.
Of course Platanias often appears at the Greek National Opera and has also lent his musical talent to the annual Athens Epidaurus Festival during the summers.
In April, the baritone sang opera selections for the Greek National Opera in its new home at the Stavros Niarchos Foundation Cultural Center in Athens. His performance engendered high praise from critic Nikos Vatopoulos.
“There are voices that are so large, deep and spacious, voices that reflect the commitment to a purpose, and meeting with them fills the listener with the fullness of a rare experience. Dimitri Platanias has a large, loyal and dedicated audience, that always rushes to support him in his personal recitals… This was also a personal bet. A confrontation with one’s self,” wrote Vatopoulos.
The critic further praised the great baritone, explaining “(Platanias) sings with the inner flame of a weighted force. He invites an idiom that is compatible with his own personality, dominated by the Italian repertoire, but also open to other schools and traditions.
“He sang Wagner in Italian. Because it is the language he likes the most, as he simply, disarmingly, told the audience, creating a bridge with them,” Vatopoulos noted.

Born on December 4, 1970, Platanias first studied classical guitar and singing at the Kalamata Municipal Conservatory. He then went on to attend The National and Kapodistrian University of Athens, graduating with a degree in English Language and English Literature.
He began singing in earnest only in the late 1990s, and in 2000 was awarded the Alexandra Triandi Scholarship by the Friends of Music Foundation in Athens. This enabled Platanias to go to Italy to study with baritone Aldo Protti’s widow, Masako Tanaka Protti, in Cremona. Upon his return to Greece, he even studied with sopranist Aris Christofellis.
In 2004 Platanias made his debut at the Greek National Opera, singing the role of “Alfio” in Mascagni’s “Cavalleria Rusticana.” He continues to appear regularly with the company at the Olympia Theatre, the Odeon of Herodes Atticus and the Athens Concert Hall.
His international debut was as “Gerard” in Giordano’s “Andrea Chenier” in 2007 at the Teatro Sociale di Rovigo in Italy. He sang in his first leading role in 2010, starting at the very top, as “Rigoletto” in Verdi’s eponymous opera at Teatro La Fenice di Venezia.
In 2012, Platanias made his debut at The Royal Opera House in Covent Garden, London.
Other important debuts were at the Bregenz Festival as Amonasro, in Verdi’s Aida, in 2010 and at Teatro Nacional de São Carlos Lisbon, singing the role of Posa, in Verdi’s Don Carlo in 2011.
In 2013 Platanias made his debut at both the Deutsche Oper Berlin and Oper Frankfurt as Scarpia, in Puccini’s tragic opera Tosca.
Other roles the Greek baritone has sung are Tonio in Leoncavallo’s I Pagliacci, Alfio in Mascagni’s Cavalleria Rusticana, Guido di Monforte in Verdi’s I Vespri Siciliani, Iago in Verdi’s Otello, Germont in Verdi’s La Traviata, Stankar inc Verdi’s Stiffelio, Grand Pretre in Saint-Saens’ Samson et Dalila, Valentin in Gounod’s Faust and Barnaba in Ponchielli’s La Gioconda.
Platanias has also released two DVDs of his performances, namely Pagliacci – Salzburg Easter Festival, conducted by Christian Thielemann, from 2016 and Cavalleria Rusticana/Pagliacci – Royal Opera Covent Garden, conducted by Antonio Pappano, also from 2016.