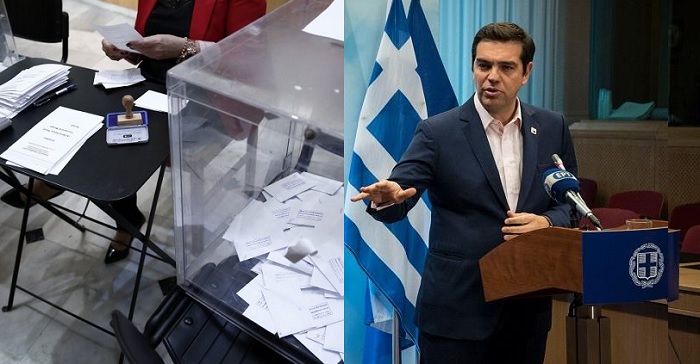 As Greece heads for the polls this coming Sunday to elect its representatives to the European Parliament, the question is not who will win, but by how much. The bellwether EU plebiscite is held in parallel with Greek municipal and regional elections.
In an election campaign where European issues have taken a backseat, all opinion polls suggest that the opposition New Democracy (ND) Party will win, with the governing SYRIZA Party coming in second.
The question, which can only be answered on Sunday, is how large the difference between the two major protagonists will be. Polls this week have put ND’s advantage at approximately seven percentage points, but there are unknown variables which could still affect the outcome.
Alexis Tsipras’ SYRIZA hopes that the difference between his party and ND is as small as possible, e.g. less than five percentage points, so he can argue that the crucial national elections, due to be held in October, can still be won.
Some commentators argue that a narrow defeat for Tsipras could tempt him to call snap elections, perhaps as soon as June.
“On Sunday, we do not vote for a government, but it is clear that it is not a vote without weight,” the Greek PM told state-run broadcaster ERT on Friday morning.
“If I do not receive the vote of confidence I ask for, everything is open,” he added, leaving the possibility open of major political developments in case the Sunday election does not grant him a vote of confidence.
For ND, the psychological barrier is 30 percentage points, which is more than SYRIZA won by in the last European elections of 2014. If the conservative opposition wins by a large margin, it could claim that the government ought to resign and hold new elections.
After all, ND is reminding voters that when Tsipras garnered 27% of the vote and six seats in 2014, he said the outcome of the vote robbed the government of any “political or moral legitimacy to continue with austerity policies.”
In any case, a large win for ND on Sunday could make its leader Kyriakos Mitsotakis appear basically like a “Prime Minister in waiting.”
One of the main decisive factors in Sunday’s elections will be undecided voters, who comprise more than ten percent of respondents in all major opinion polls. Most of them voted for SYRIZA in the 2015 parliamentary elections.
Tsipras has made a late attempt to sway voters by recently unveiling a package of tax reductions, lump-sum payments to pensioners and schemes allowing taxpayers to settle unpaid taxes and social security contributions in up to 120 installments.
Opinion polls have suggested that the “relief measures” have rallied some support for SYRIZA, somewhat closing the gap between them and ND — but not enough.
The voting intentions of new voters are also largely unknown. Seventeen-year-olds will cast their votes for the first time in Greece on Sunday.
Finally, politicians and commentators will keep a close watch on the abstention rates. In the 2014 European elections, just above 40 percent of registered voters abstained from voting altogether, choosing a day off in the sunshine over the ballot box.
A total of forty parties and coalitions will participate in the European elections. The parties who are guaranteed representation are five in number: SYRIZA, ND, the center-left Movement for Change, the extreme-right Golden Dawn and the Communist Party (KKE).
Greece has twenty-one seats in the 705-seat assembly. The Greek threshold for entering EU Parliament is three percent. Greeks living abroad vote one day earlier, on May 25.