GRNews
GreekReporter.comGreek NewsEconomyRevenues from American Tourists in Greece Up By 119% in First Quarter... 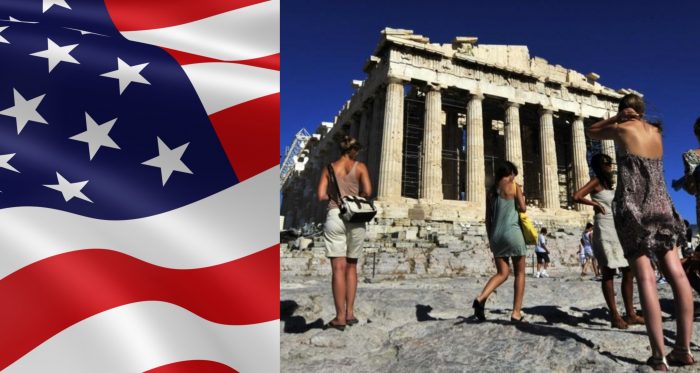 According to the latest figures published by the Bank of Greece recently, revenues that American tourists left in Greece during the first quarter of 2019 went up by a whopping 118.9 percent compared to the first quarter of 2018.
Tourists from the United States now come in second, only after the Germans, in absolute terms of the amount of money they spend in Greece.
The period between January and March of 2019, universally considered as the definite offseason for visiting Greece, recorded a total increase in revenues of 37.2 percent compared to the same period last year.
Despite the fact that it is too early to draw any final conclusions, this trend could mean that 2019 is shaping up to be another record-breaking year both in terms of the number of tourists and the revenue they bring in to the Greek economy.
The revenues from British tourists in Greece during the first quarter of 2019 recorded an increase of 79.5 percent; with Russian visitors, the increase was 63.5 percent. French tourists spent an average of 55.3 percent more in Greece so far this year, and Germans spent more than and 9.5 per cent more than they had at the same time last year.
Between January 1 and March 31, 2019, 1,936,000 people visited the country of Greece for tourist purposes, a figure which represents a solid gain of 7.9 percent over the numbers seen in 2018.
However, despite the increase in real numbers of travelers, Greek hotels saw their bookings drop slightly, something which apparently indicates that larger numbers of tourists are now choosing Airbnb-style platforms to find apartments or houses for their stay in Greece.