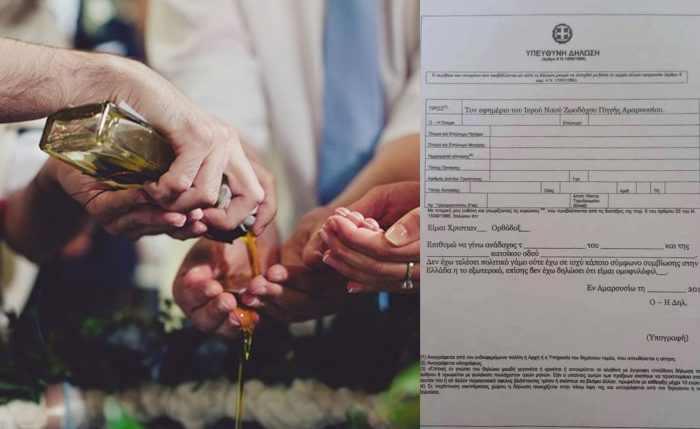 A priest from the suburb of Maroussi in northern Athens allegedly asked a woman to sign an official declaration recently stating that she had never said that she was homosexual.
The peculiar incident has gone viral in Greece over the last couple of days, sparking widespread negative reaction against the priest and the Metropolis of Kifissia.
The woman who accuses the priest of asking her to sign the paper before becoming a godmother posted a photograph of the alleged document on Facebook.
She has now said that she intends to file a formal complaint to the Greek Data Protection Authority about the incident. She claims that the priest, from the Church of Zoodochos Pigi (“Life-Giving Spring”) in Maroussi, gave her the document and asked her to sign it if she wanted to be approved as a godmother.
In the document, a candidate for godfather or godmother has to declare that he or she is not married using the procedures of civil marriage, and he or she is not living with a partner under a civil partnership conducted in Greece or abroad. The paper also stipulates that the godparental candidate must never have said that he or she is homosexual.
Following public outrage over the incident, the Metropolis of Kifissia issued a statement noting that the woman who made this claim has to publicly say who gave her the document. They further stated that the Metropolis ”does not possess such documents” and does not use such procedures.
It is noted that the Orthodox Christian Church does not approve of homosexual relationships, but this is the first time anyone has ever accused the church of making prospective godparents sign such a statement.