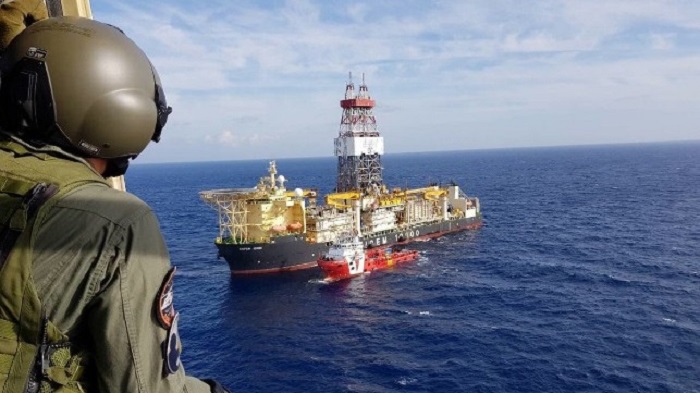 The American Energy Company Exxon Mobil announced on Thursday afternoon that after a series of exploratory drillings, they have discovered large quantities of natural gas off the coast of Cyprus.
The discovery was made at the well named ”Glaucus 1,” which is located inside the boundaries of Cyprus’ Block number 10 in the Republic’s Exclusive Economic Zone.
The well was drilled at depths reaching 4.2 kilometers (13,800 feet). The quantities of natural gas discovered range from 5 to 8 trillion square feet and there is a possibility that they could be even greater.
Steve Greenlee, president of Exxon Mobil Exploration Company, noted that ”these are encouraging results in a frontier exploration area,” and added that ”the potential for this newly discovered resource to serve as an energy source for regional and global markets will be evaluated further.”
The first well dug by Exxon Mobil was Delphyne 1. However, the company was disappointed with the results since the quantities of natural gas discovered there were not commercially exploitable.
According to media reports, the discovery is the largest so far in Cyprus and one of the largest in the world for this year, in terms of the sheer quantity of gas found. The overall quantity discovered puts ”Glaucus 1” in the medium-size category of natural-gas discoveries in terms of size.
At a press conference in Nicosia, Cyprus Energy Minister George Lakkotropis said he is excited about the findings. “It is an amazing development for all of Cyprus. This is the greatest discovery within our Exclusive Economic Zone (EEZ). In the coming months, the amount of natural gas will be more accurately estimated,” he said.
“The results,” he added, “demonstrate the potential of our EEZ because it is a high-quality reservoir.”

@ExxonMobil & @QatarPetroleum make a world-class discovery offshore #Cyprus at #Glaucus. A high-quality reservoir 5-8 TCF of #NatGas is added to the country’s reserves and demonstrates the emergence of the Republic‘s #EEZ as an alternative indigenous source of supply to the #EU. pic.twitter.com/BkE0VKrKTS

Before the announcement, Vice President of Exxon Mobil Tristan J. Aspray met with the President of the Republic of Cyprus, Nicos Anastasiades, to inform him of the new discoveries in Cyprus’ Exclusive Economic Zone.

Turkey also claims it has rights to energy exploration off the coast of the island.
Ankara has warned international firms against exploration in the disputed waters, where Turkey backs a breakaway proto-state in the northern third of the island.
Turkish President Recep Tayyip Erdogan has warned foreign energy companies not to “overstep the mark”, and officials have said Turkish ships would soon begin their own offshore drilling there.