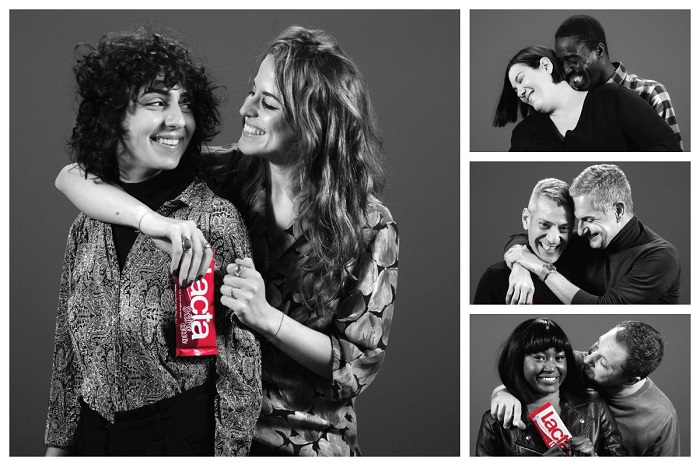 The recent Valentine’s Day advertising campaign for a famous chocolate brand, which features same-sex and interracial couples has fueled controversy in Greece.
Lacta’s campaign features twenty-eight couples kissing and hugging while holding a chocolate bar. The couples are heterosexual, disabled, racially different, and of all ages, but it was the homosexual couples which drew the majority of trolling on social media.
The company says that their “#actforlove” marketing campaign was created to promote love and social diversity by casting a spotlight on different types of couples and telling their stories.
“Love has no color, age, nationality or gender. It has no rules and does not discriminate,” the campaign says.
Photographer Chloe Kritharas Devienne was surprised by the negative reaction. Her face appeared all over Twitter with commenters appending a message beneath saying: “This is the photographer who did this.” Critics posted links to her work with refugees and labelled her as “excessively liberal.”
Kritharas Devienne told Reuters that in Greece people are very homophobic. “The church has made it very clear it considers homosexuality a sin,” said Devienne. “Personally I love both men and women. I thought that nothing would make me happier than to have these pictures all over Athens so that homophobic people are forced to look at them…”
The Lacta confectionery company urged Facebook users to “embrace all tastes of love.” The brand, which is popular with children, has drawn criticism for the stated aim of the advertising campaign.
“Little children will see this! What standards will you pass to them?” wrote one critic, while other social media users told the candy company that the campaign was “shameful.”