Karras has been on the New England Patriots team for their last three Super Bowl appearances, from 2017 to 2019, including both wins, in 2017 and this year.

Karras was inactive and didn’t appear onfield in Sunday’s game, but his name will always be etched on the roster of the Super Bowl winners, and he will be appearing in the victory parade today in downtown Boston.

The Karras family is steeped in football history. Ted’s father, Ted Karras Jr., played for one year (1987) in the National Football League as a member of the Washington Redskins team. He has his own Super Bowl ring from that campaign.

Karras Jr. played for the Washington Redskins during the NFL strike. When he put on his Super Bowl ring from the 1987 Super Bowl in June 2018, he became the third Ted Karras with a Super Bowl ring.

“My dad got a Super Bowl bonus from the Redskins because he was a (replacement player) during the strike, and my grandpa won a world championship … I could be the third Karras with a Super Bowl ring,” Ted Karras said.

“That lineage always has been important to me to uphold,” he told interviewers after the 2017 Super Bowl, when the Patriots produced the greatest comeback in Super Bowl history, beating the Atlanta Falcons 34-28 in overtime. 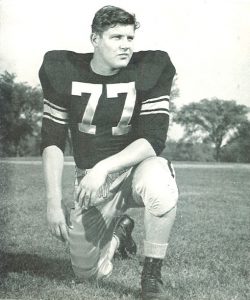 He was a four-time Pro Bowl player with the Detroit Lions of the National Football League (NFL), where he played from 1958 to 1970.

Alex Karras was the son of Dr. George Karras, a Greek immigrant from Chios who graduated from the University of Chicago and earned his medical degree in Canada.

Dr. Karras opened a medical practice in Gary, Indiana, but he died when Alex was only thirteen years old. By that time, Alex had learned to play football in a parking lot near his home, and he blossomed into a four-time Indiana all-state selection at Gary’s Emerson High School.

As an actor, Karras was noted for his role as Mongo in the 1974 comedy film “Blazing Saddles.”

He was also known for starring as Webster Long’s (Emmanuel Lewis’) adoptive father, George Papadopolis, in the ABC comedy “Webster”, which aired from 1983 to 1989, alongside his wife Susan Clark.

He also played Sheriff Wallace in the movie “Porky’s”, in which his wife, Susan Clark, also starred, and portrayed western settler Hans Brumbaugh in the film “Centennial.”

Karras played a darker role as Hank Sully, the right-hand-man of villain Jake Wise (played by James Woods) in the 1984 film, “Against All Odds.”

Alex Karras’ most memorable role was in the 1975 made-for-TV movie “Babe,” in which he played the hulking ex-wrestler George Zaharias, who tenderly cared for his cancer-stricken wife, the legendary athlete Babe Didrikson Zaharias.