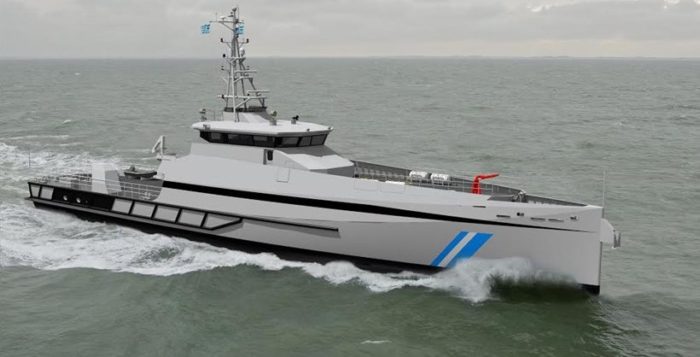 Greece will soon obtain three state-of-the-art coastal patrol boats, with 90 percent of their funding coming from the E.U.’s Frontex border patrol agency.
According to the contract signed on Tuesday by the Greek Ministry of Shipping and Island Policy, the three vessels will be constructed and delivered by the Italian shipyard ”Cantiere Navale Vittoria” next year.
The Italian company was selected after an international bid process, and the total cost of the purchase is estimated to be approximately €42 million ($48 million).
Shipping and Island Policy Minister Fotis Kouvelis said the new boats will be specially equipped to monitor the E.U.’s external maritime borders and to rescue people at sea.
Kouvelis said that the Ministry has already secured funds for the purchase of a fourth boat, for which he credited the contribution of his predecessors, Theodoros Dritsas and Panagiotis Kouroublis, along with the Greek Coast Guard leadership.
Kouvelis added that the Shipping and Island Policy Ministry would shortly be inviting international companies to bid for the building of additional high-speed patrol boats valued at €49 million ($56 million).
The purchase of these additional craft would be co-funded by the Internal Security Funds of the E.U., while the purchase of yet another three boats of over 11 meters in length (99 feet) is also in the works.
The signing of the agreement was attended by the president of the Cantiere Navale Vittoria Shipyard and the Italian Ambassador to Greece, Luigi Marras.
The European Border and Coast Guard Agency, also known as Frontex, is an E.U. agency headquartered in Warsaw which is tasked with controlling the external borders of the European Union.
With information from AMNA