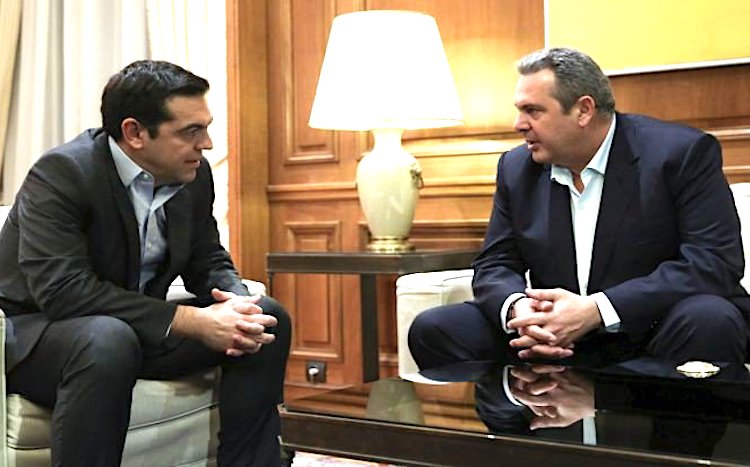 Greek Prime Minister Alexis Tsipras announced on Sunday that he will seek a confidence vote after the leader of nationalist Independence Greek Party (ANEL) Panos Kammenos said he his is pulling out from the government due to its opposition to the Prespa agreement.
The announcement came after his meeting with Kammenos.
Tsipras thanked Kammenos for his support and announced that the new Minister of Defense will be the Chairman of the Hellenic National Defence General Staff, Admiral Vangelis Apostolakis.
Kammenos, whose party props up the government, has long opposed the name deal which was signed between the two countries last year, he feels it contradicts what the country stands for.
In a press conference, the leader of ANEL said that his party will not give a confidence vote to the government. A vote supporting the government would be tantamount to supporting the Prespa agreement, he said. He also warned that party members who maintain their cabinet position will be expelled from the party.
If his parliamentary party follows Kammenos in his decision to deny a confidence vote, Tsipras would need the support of opposition MPs to prevent his government from collapsing.
In any case, political commentators say that the vote likely to take place in the middle of next week would be a cliffhanger.
Tsipras’s coalition has 153 seats in the 300-strong parliament, 145 of them from his leftist Syriza party.
Speaking earlier to the assembled media, Kammenos said that the major goal of the coalition government, namely the exit from the bailout era, has been achieved.
“I met with the prime minister. We had quite a long discussion. There was cooperation lasting four whole years in a government of national unity… two parties from different areas came together and succeeded in extricating Greece from the memorandums. The first goal was achieved,” Kammenos told reporters as he left the Maximos Mansion and the meeting with the prime minister.
“The issue of Macedonia, an issue for which thousands were killed, doesn’t permit me to not sacrifice the seat [in government],” he added, saying that detailed announcements will be made in a press conference later on Sunday.
“I thanked the prime minister for our cooperation and explained to him that due to the national issue this cooperation cannot continue. ANEL is withdrawing from the government,” he concluded.
In a highly symbolic move, Kammenos, before his meeting with Tsipras received the Holy Communion at the Athens Metropolis.