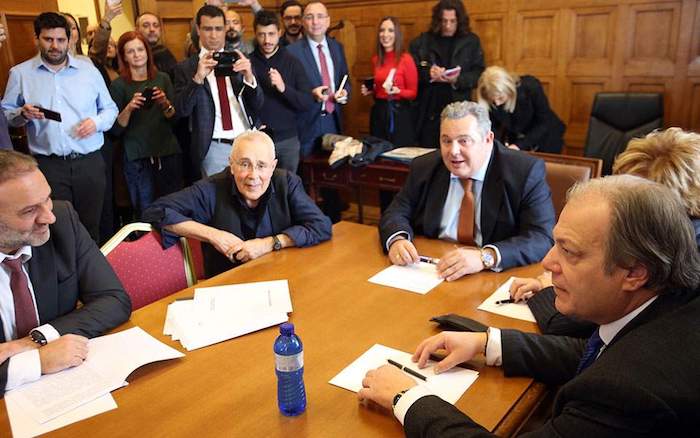 Only two out of seven lawmakers from ANEL, the Independent Greek Party, backed party chief Panos Kammenos‘ request, which he made on Friday, to withdraw ANEL officials from their ministerial posts and dissolve the country’s coalition government.
With so few ANEL lawmakers voting to request removal from Prime Minister Alexis Tsipras’ coalition, it is unclear how the party will proceed. Their dispute continues with the leftist SYRIZA Party over the FYROM name dispute and other stipulations of the Prespa agreement.
Kammenos said on Friday that his meeting with Tsipras scheduled for that day was postponed, after the FYROM debate on the ratification of the controversial name deal with Greece was put on hold on Thursday.
Just this Wednesday, during an interview with the Open TV channel, Tsipras vowed that if ANEL dissolved the coalition over the Prespa agreement, he would seek a confidence vote in Parliament. SYRIZA would then need the support of 151 lawmakers to stay in power.
Tsipras noted at that time, “Even if you haven’t got 151 lawmakers, you have no problem by the constitution in carrying on.”  He added, however, that he would still have a “political problem.”
“In such an eventuality, I will proceed in due time with snap elections, whose timing will depend on the crucial initiatives we have said we will implement. But I’m saying that there is no such thing as an impasse in democracy,” the Greek P.M. said firmly. “I believe I will secure a confidence vote,” he declared.
Foreign Minister Kammenos made his position clear in October of 2018, as progress was being made towards resolving the FYROM name dispute. Kammenos dug in his heels, stating that “ANEL has been clear on its position; we will not accept the term ‘Macedonia.'”
He declared later that “We have never cooperated with those who want to steal our history.” He then added that ANEL would leave the Greek coalition government over the “North Macedonia” name deal, which is part of the Prespa Agreement.