TechNews
GreekReporter.com Greece The Greek Custom of Vasilopita and the Lucky Coin for the New... 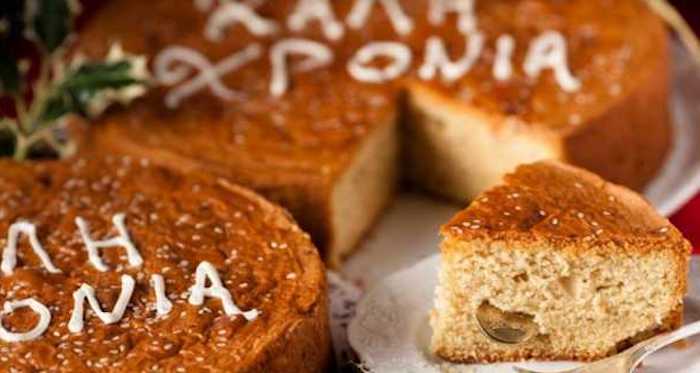 The story of the Greek Orthodox custom of the Vasilopita with the lucky coin inside, begins in Asia Minor, and more specifically in the city of Caesarea in Cappadocia, more than 1600 years ago. This was during the time when Basil the Great; who later became a Saint, was Bishop of Caesarea.
St. Basil the Great was born at Caesarea of Cappadocia in 330. He was one of ten children of St. Basil the Elder and St. Emmelia. Several of his brothers and sisters are also honoured among the saints. He attended school in Caesarea, as well as Constantinople and Athens, where he became acquainted with St. Gregory Nazianzen in 352.
Later, he opened a school of oratory in Caesarea and practiced law. Eventually he decided to become a monk and found a monastery in Pontus, which he directed for five years.
He wrote a famous monastic rule which has proved the most lasting of those in the East. After founding several other monasteries, he was ordained, and in 370 he was made Bishop of Caesarea.
He served that post until his death in 379, while he continued to be a man of vast learning and constant activity, genuine eloquence and immense charity. This earned him the title of “Great” during his life. The Church sanctified him after his death.
Basil was one of the giants of the early Christian Church. He was responsible for the victory of Nicene orthodoxy over Arianism in the Byzantine East, and the denunciation of Arianism at the Council of Constantinople in 381-82, was in large measure due to his efforts. Basil fought simony, aided the victims of drought and famine, strove for a better clergy, insisted on a rigid clerical discipline, fearlessly denounced evil wherever he detected it, and excommunicated those involved in the widespread prostitution traffic in Cappadocia. He was learned, accomplished in statesmanship, a man of great personal holiness, and one of the great orators of Christianity. His feast day is January 1.

The story of the lucky coin in the Vasilopita originates from the time the prefect of Cappadocia; a true tyrant, asked for all the treasures of the city of Caesarea to be delivered to him, otherwise he would besiege the city to conquer and loot it.
Basil, as Bishop, prayed to God all night to save the city. The next morning the prefect’s army surrounded the city of Caesarea. The prefect entered the city with his guard and asked to see the Bishop. The angry prefect demanded all the gold of the city, as well as any other treasures that they kept.
The Bishop replied that the people of his city had nothing but hunger and poverty, so they had nothing to give to the prefect. Upon hearing those words, the tyrant was infuriated and threatened to oust the Bishop from his homeland or even kill him.
The Christians of Caesarea loved their Bishop and wanted to help him. So they gathered all the gold they had in their possession, put in inside a chest and offered it to Basil so that he would give to the ruthless prefect.
The tyrant was impatient though, and upon Basil’s first reply, he ordered his army to attack the poor people of the city.

Basil the Great, in his turn, offered the chest of gold to the prefect in order to save the city. But when the tyrant opened the chest and put his greedy hands on the gold, a miracle happened:
All the people who had gathered around the prefect and the chest, saw a brilliant glow and from inside the chest a rider followed by an army came out of the chest and wiped out the army of the prefect. The glowing horseman was Philopater Mercurius (Saint Mercurius), and his army was an army of angels.
Thus the city of Caesarea was saved. But then, the Bishop had to share the gold that was given to him with all the city residents. He wanted the sharing of the gold to be fair, a rather difficult task. So Basil the Great prayed to God for advice and He told him what to do:
The Bishop called all deacons and his assistants and told them to knead buns and put pieces of gold in each one. When they were ready, Basil the Great distributed the bread to all inhabitants of the city of Caesarea. In the beginning everyone was surprised, but then they were even more surprised when every family that cut the buns found pieces of gold inside. It was a special piece of bread, one that brought people joy and blessings together.
Since then, the Vasilopita has become a Christian tradition, where on the first day of the New Year, Saint Basil’s Day, the faithful cut the bread hoping to find the coin that is said to bring them blessings throughout the whole year.

Get our traditional Vasilopita recipe and video!