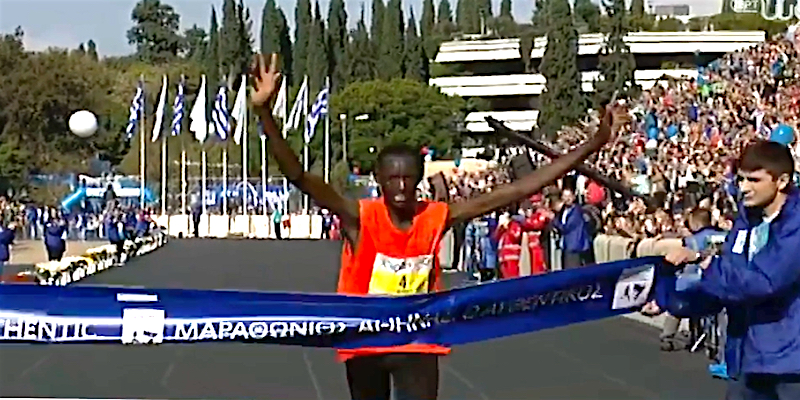 Brimin Kipkorir Misoi from Kenya is the athlete who finished first in the 36th Authentic Athens Marathon on Sunday, clocking at 2:10:57.
Over 55,000 runners from 105 countries flooded Attica to compete in the classical 42km route and the 5km and 10km races, along with other races for children and people with special needs.
The classical route of the 36th Athens Marathon started at 9.00 am in Marathon, in an emotionally charged atmosphere, as it passes through Mati, where 99 people died from the East Attica wildfires in July.
The particular race is dedicated to the memory of peacemaker and parliamentary Grigoris  Lambrakis, Balkan champion in the long jump. However, Marathon Mayor Elias Psinakis dedicated the run to the victims of the fires in Mati.

According to the organisers, 18,750 runners participated in the particular race.
In Athens, the start signal for the 10 km race was given at 8:30 by Mayor Giorgos Kaminis, at Syntagma Square. Earlier, at 7:45, it was the start of the 5k race.
The classical Marathon-Athens race route is established in honor of the unknown Athenian soldier, who in 490 BC ran from Marathon to Athens to announce the victory of the Athenian army against the Persians in the Marathon Battle.