Tina Livanos: The Beautiful Greek who Made Onassis and Niarchos Arch Rivals 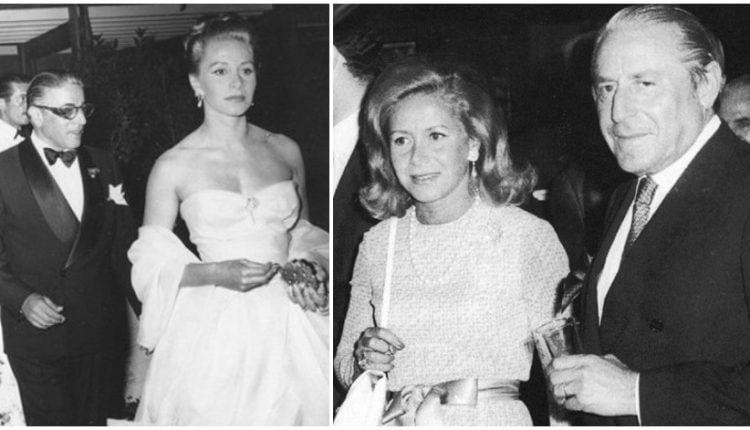 It was October 10, 1974 when Tina Livanos was found dead in a hotel suite in Paris. It was the end of a life that was the stuff of legend, as the beautiful aristocratic woman had married Greece’s biggest shipping magnates: Aristotle Onassis and Stavros Niarchos.
Her death was attributed to excessive use of barbiturates. In the next room, her husband Stavros Niarchos was sleeping unaware of the tragedy.
Daughter of the patriarch of Greek shipowners Stavros Livanos, Tina was born in 1929 and grew up as a beautiful princess living between London and New York. She studied in the best colleges, spent holidays in the most cosmopolitan resorts around the world and was associating with princes and kings, famous actors and international celebrities since she was a child. 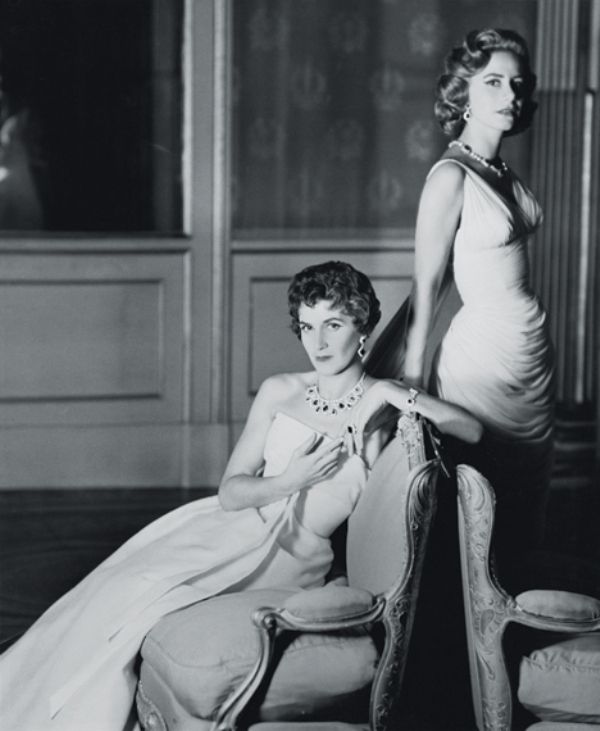 Tina Livanos (right) with her sister Eugenia
Gifted with stunning looks, Tina Livanos attracted the attention everywhere she went. Two of the men who were mesmerized by her beauty were shipping tycoons Aristotle Onassis and Stavros Niarchos.
According to Onassis’ biographer Peter Evans, Onassis was jealous of Niarchos because of his elegance, his aristocratic air, his cosmopolitan finesse. Even in the most expensive suit, Onassis looked like a poor man trying to impress, Evans wrote. At the same time, Niarchos exalted the boredom of the very wealthy.
Niarchos approached Stavros Livanos first and asked for the hand of young Tina, who was 14 at the time. The father advised him to be patient because there was his other daughter, Eugenia, who had to marry first because she was three years older.
Onassis came second in asking to marry Tina. Livanos gave the same answer he had given to Niarchos. But Onassis was more persistent. Now he had another strong  motive to beat his rival in marrying the beautiful princess.
The courting lasted three years, as Onassis was infatuated with the young girl. It took many expensive gifts, countless days sailing on his yacht and barbecues. Finally, in 1946, with Tina only 17, Stavros Livanos gave Onassis his blessing. The shipping tycoon was 40 at the time.
The lavish wedding took place in New York in 1946, with shipowner Andreas Embirikos as best man. It was the event of the year in the circles of the rich and famous. 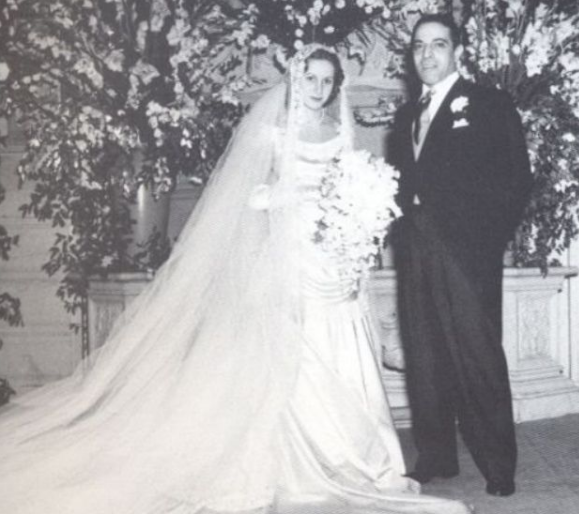 The marriage was also the beginning of an epic rivalry between the two richest Greeks of the time, Aristotle Onassis and Stavros Niarchos.
Niarchos’ answer to Onassis’ wedding was unexpected and added a new dimension to the hatred between the two men: A year later he married the equally sought-after, but less beautiful, sister of Tina, Eugenia.
The two men, who were now related by marriage, started an insane competition. Onassis’s yacht “Christina” was a floating palace. Niarchos had built “Creole”. Onassis built his own paradise in his private Scorpios island. Niarchos did the same with  Spetsopoula. 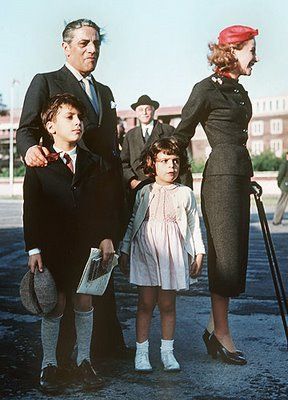 The Onassis family
On April 30, 1948, Tina Livanos brought to life in a New York clinic a boy to be named Alexandros, and two years later, on December 11, 1950, a girl to be named  Christina.
Yet, Onassis’ obsession with beautiful women was not over with Tina. The couple became detached with time and the only time they spent together was when they were throwing parties and pretended they were the happy hosts.
Tina knew that her husband was sleeping with other women and knew who they were. When, however, she did the same and started an affair with the young Brazilian millionaire and playboy Reinaldo Herrera, Onassis was furious .
In retaliation, Onassis fell in love with opera diva Maria Callas.
In the summer of 1959, Onassis invited Callas and her husband Giovanni Battista Meneghini on a cruise on the luxurious “Christina”. In the beginning, everything went well, with Tina enjoying Callas’ company. Over the days though, it is rumored that Tina began to suspect that there was something a love was born between her husband and the great singer. 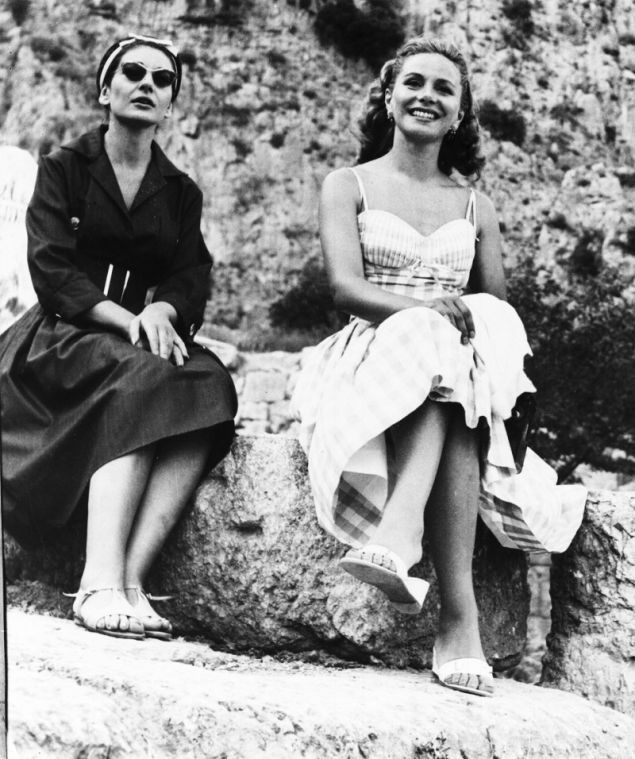 Tina Livanos with Maria Callas
By the end of the cruise, Onassis could no longer hide his love for Maria, something that made his wife leave the yacht in a hurry.
In November 1959, Mrs Livanos-Onassis filed for divorce at the Supreme Court of New York for adultery – the only cause of divorce that was then recognized in New York – asking for the custody of Alexandros and Christina.
The 30-year-old woman accused her husband of having committed adultery with a woman named J.R. on land and sea, in the U.S., France, Monte Carlo, Greece and Turkey. She can not publicly admit that Maria Callas actually stole her husband.
A year later, Tina Livanos is officially divorced from Aristotle Onassis. In the official text there is no mention of adultery.
On May 4, 1970, Niarchos made headlines in newspapers around the world. His wife, Evgenia, 44, was found dead on Spetsopoula under mysterious circumstances. The coroner found signs of struggle and bruises on her body. Was Eugenia killed or murdered? The official version is death from excessive use of barbiturates.
The Livanos family stands by the side of Niarchos, accepting that Eugenia died of excessive use of barbiturates and that the bruising came, as Stavros Niarchos has argued, from his attempts to bring her back to consciousness. After all the bruises were minor and they could not cause death.
In 1961, Tina Livanos married Englishman John Spencer – Churchill, the 11th Duke of Marlborough, with whom she got divorced in 1971.
Only months later, Tina did the unexpected, shocking everyone in Greece. The former Mrs. Onassis married the widower of her sister and arch rival of her former husband, Stavros Niarchos. 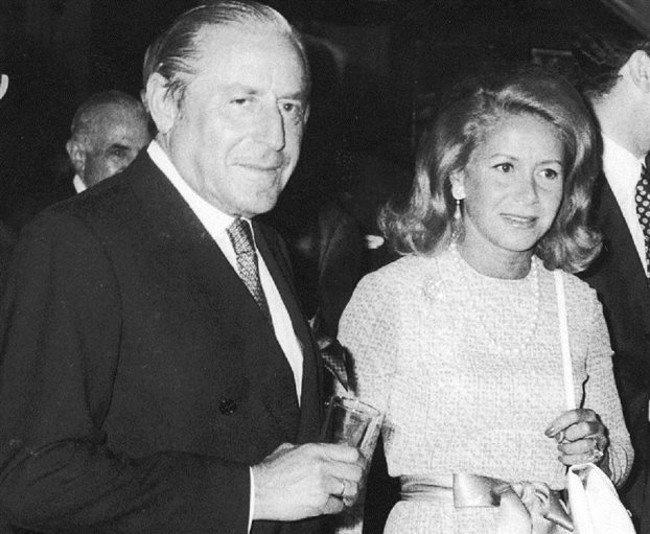 Tina Livanos with Stavros Niarchos
The wedding with the blessing of the Livanos family was proof that any suspicions of Niarchos’ fault in the death of Eugenia were dissolved. For Niarchos himself the marriage was the fulfillment of a decades-long wish and a response to Onassis.
However, Onassis and her son Alexandros openly opposed her choice.
Less than two years later, though, the unlikely marriage was overshadowed by a great tragedy. On January 23, 1973, Alexandros Onassis is killed after his private plane crashes. From that moment on, biographers describe parents Tina Livanos and Aristotle Onassis as two living dead.
The next year, on October 10, 1974, Tina Livanos has the same fate as her sister. She is found dead in a hotel suite in Paris, dead from barbiturates overdose.