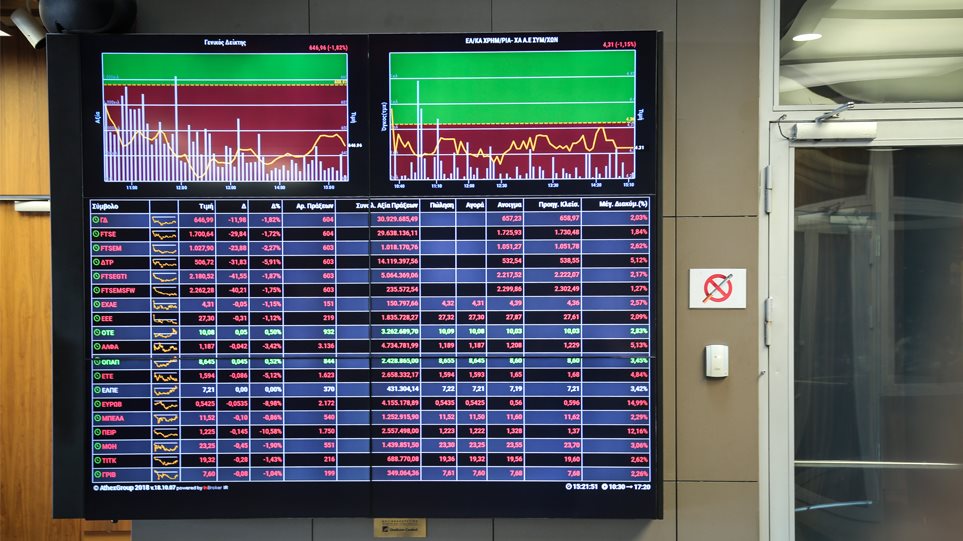 The turmoil in the Italian economy and the deterioration of Greek state bonds dragged down the Athens Stock Exchange on Monday, with the General Index showing a 2.61 percent loss to 641.79 points.
Once again, Greek bank shares led the downward trend that started in September. The latest massive sell-off have sent the total capitalization of the four systemic banks below €5 billion.
The General Index ended with a loss of 2.61 percent to 641.79 points, the high cap index closed down 2.80 percent to 1.682.10 points, while the banking index closed down 6.45 percent to 503.83 points.
The total value of transactions amounted to €53,616 million euros, while 33,517,552 shares changed hands.
The deterioration of Greek bonds increases risk aversion, analysts said. The 10-year bond yield has already reached 4.66 percent from 4.52 percent on Friday, returning to the levels negotiated at the end of August. In neighboring Italy, the 10-year bond yield is the highest since 2014, reaching 3.6 percent.
Regarding the bank shares sell-off, early last week a Goldman Sachs report warned that the ability of the Greek banking system to withstand any shocks (internal or external, economic or political) remains limited.
Also, according to a HSBC report, investor confidence in Greek banks has been shaken, and stresses that in September, the capitalization of Greek banks dropped by €1.6 billion. This time the losses are linked to market confidence in the Greek banking industry, HSBC says, considering that although understandable, they are a little over-exaggerated.