By Nick Kampouris
September 18, 2018
Facebook
Twitter
WhatsApp
Linkedin
Email
It was September 18, 2013 when the 34-year-old activist and singer Pavlos Fyssas was assassinated by George Roupakias, a member of the Greek neo-nazi Golden Dawn party in Athens, Greece.
Following the general outrage, the Greek authorities launched an investigation regarding the issue of Golden Dawn and its actions that led to the arrest of senior members of the party, including MPs and its leader, Nikos Michaloliakos.

On Tuesday, 5, years after Fyssas’ assassination, thousands of people gathered in central Athens as well as in many other Greek cities to pay homage to the young activist, who was murdered for his political beliefs.
Fyssas was assaulted by a group of people wearing t-shirts with Golden Dawn’s logo before being murdered by Roupakias with a knife.
The murderer was arrested red-handed and later admitted his crime. 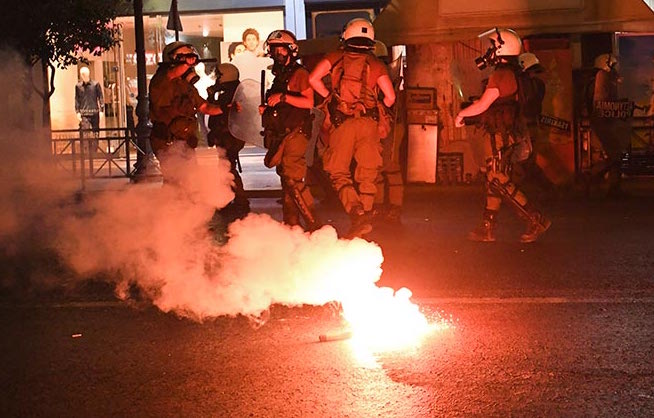 Following the demonstration in Patras, some people, believed to be Anarchists, threw molotov cocktails in Ermou street and set fire to trash bins, while in Piraeus, groups of people threw rocks and molotov cocktails at police who were guarding the area.
They also broke the windows of some banks of the area.
The situation turned worse when the police responded throwing tear gas at the hooded men, making Piraeus’ center unapproachable. A few minutes later, the people involved disappeared into Piraeus’ back streets.