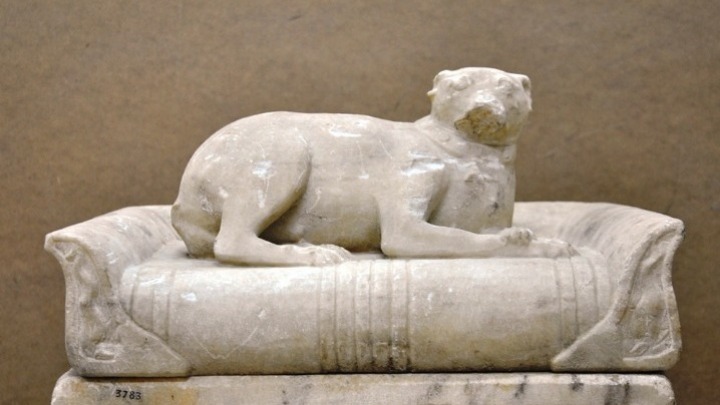 A rare Roman-era funerary monument — that may have been the grave of a pet dog  –is the 18th treasure to be brought out of the National Archaeological Museum store rooms to present to visitors as part of the Unseen Museum exhibition.
The marble sarcophagus with a sculpture of a “couchant little dog” on its lid was found in the National Gardens in central Athens in the winter of 1937 and was transferred to the museum. It was brought out of storage for the first time on Monday and will remain on display until October 21.
A selection of artifacts from the museum’s store rooms have been placed on display for the Unseen Museum exhibition, each for a period of two months. The particular artifact complements the temporary exhibition “Hadrian and Athens: Conversing with an Ideal World” that opened on November 27 and will run for a year.
From August until October, museum archaeologists will conduct tours for visitors that focus on the habits of ancient Athenians, including their strong ties to pets. These tours will be held on three Sundays (August 19, September 16 and October 21) and two Fridays (September 14 and October 19), starting at 13:00.
To attend the presentations, visitors must first obtain a ticket on arrival. Tickets are issued on a first come, first served basis until available places are filled. Further details are available at the following telephone numbers: 213 2144856, 213 2144858, 213 2144866, 213 2144893.
[Source: Athens – Macedonian News Agency]