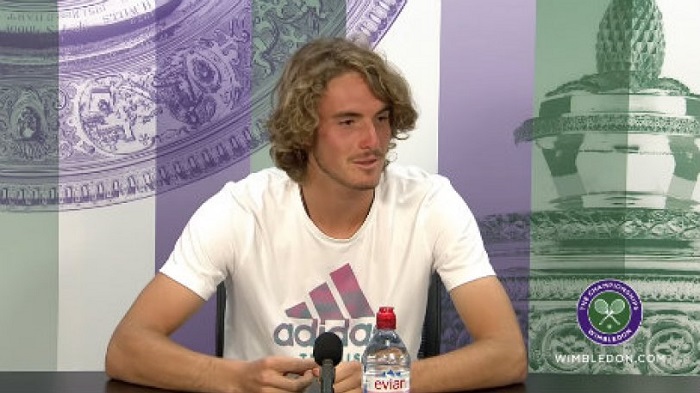 Greek tennis sensation Stefanos Tsitsipas hailed his Spartan fighting spirit as he prepares to meet ninth seed John Isner at a mouthwatering fourth round clash in Wimbledon on Monday.
The 19-year-old, a former junior number one and the third-youngest player in the top 100, is the son of a Greek father and a Russian mother.
Tsitsipas, seeded 31st, said his fighting character came from the Greek side of his family.
“Sparta,” he said.
“I was a fighter and I hated losing since a very young age. Back in the day, I used to compete with children in my age group in Greece, and then I moved on to European level.
“But I’ve always wanted to be the best from a very young age. I just hated losing. That’s why I was always fighting.”
The only other Greek men to reach the last 16 of a Grand Slam, all in the pre-Open Era of tennis, are Augustos Zerlendis (1920 Wimbledon), Lazaros Stalios (1936 French Open) and Nicky Kalogeropoulos (1964 Wimbledon).
“I feel extremely proud that I can be the first Greek in the Open Era in the fourth round of a Grand Slam. There is so much satisfaction,” he said.
Stefanos speaking to the press after his third round win over Italian qualifier Thomas Fabbiano 6-2, 6-1, 6-4.