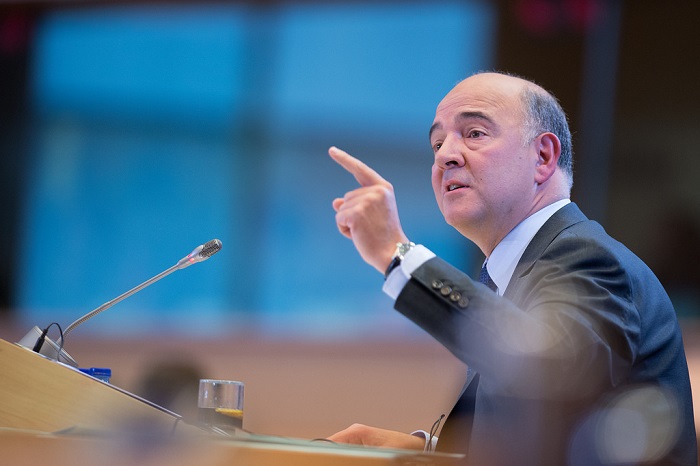 EU Commissioner Pierre Moscovici launched an attack on Greece’s opposition for criticizing the June Eurogroup agreement and the exit of the country from the bailout “for reasons of internal politics”.
During a speech at the European Parliament in Strasbourg on Wednesday, Moscovici, stressed that Greece is “changing a page” to become again a “normal country” in the eurozone.
He said that the post-August enhanced surveillance regime “is not a fourth bailout agreement”.
Taking a swipe against leader of Greece’s main opposition leader, Kyriakos Mitsotakis, whom he met earlier in the week in Athens, the commissioner said that politicians must tell the truth.
On Tuesday, Mitsotakis urged Moscovici to “be careful” when praising the Greek government in public and talking about a “clean exit” from the bailout.
“Contrary to what I heard in Athens from some politicians – who need to be careful about what they say because a politician cannot turn against the truth — enhanced surveillance is not a fourth program. It is a framework for the ongoing reforms to be implemented,” he stressed.
His speech triggered an angry response from Greek conservative MEPs. The head of the grouping, Manolis Kefalogiannis, told Moscovici that he had adopted the government’s narrative of the supposed “clear exit from the era of memoranda.”
“Moscovici forgets that Greek Premier Alexis Tsipras has committed the country to implement tough austerity measures for the coming years,” Kefalogiannis said.
Moscovici speaking in the European Parliament (Greek voice-over)