GRNews
GreekReporter.comGreeceWhen Turkey Banned the Teaching of Greek on Imbros and Tenedos Islands

July 1 marks the anniversary of the day Turkey banned the teaching of the Greek language on the islands of Imbros and Tenedos, (now Gokceada and Bozcaada in Turkish) both formerly Greek since ancient times.
Yet, after the rise of Turkish nationalism and the persecution of Greeks in the mid-1950s, on 1 July 1964, the then Turkish government prohibited the teaching of Greek on the two islands.
The two Aegean islands were Greek since ancient times, as Imbros belonged to the Athenian Alliance and on Tenedos there was a temple of Apollo. However, after the fall of the Byzantine Empire, the two Aegean islands were claimed by the Ottomans and the Venetians, mainly because of their strategic position, both being very close to the entrance of the Dardanelles Strait that leads to the Marmara Sea.
At the time of World War I, on Imbros there were 8,000 Greeks and on Tenedos near 3,000. Until 1920 they belonged to the Ottoman Empire. After Turkey and Germany lost the war, the 1920 Treaty of Sevres saw the two islands granted to Greece, an event that was greeted with enthusiasm by their inhabitants.
However, the joy lasted only two years. After the Asia Minor campaign catastrophe and the defeat of the Greek army, the Treaty of Lausanne granted the islands to Turkey. The inhabitants of the islands were exempted from the compulsory exchange of populations, with the Treaty providing for the autonomy and protection of Greek residents and minorities in general. Unfortunately, the agreement was violated by the Turkish side.
As early as 1927, most of the buildings of the island were demolished, as a massive colonization of people from the Turkish hinterland went into effect. The population of the islands was gradually altered, along with the expropriation of properties belonging to Greeks.
In 1955, Turkish fanaticism was at its peak, leading to the persecution of Greeks living in Turkish territories. The living conditions for Greeks in Turkey had been very difficult. On July 1, 1964, in an effort to alter further the populations of Imbros and Tenedos, the Turks banned the teaching of the Greek language in schools. It was the same time that a large number of Greeks living in Constantinople were expelled.
In 1924, the schools of the two islands were all Greek, while in the year of the ban on Imbros there were seven Greek schools with 693 Greek pupils. On Tenedos the number was far lower.
Many Greeks fled the two islands. Others refused to leave their homes. Yet many Greeks withstood, with the mother tongue still being spoken on the two islands. Characteristically, Ecumenical Patriarch Bartholomew was born on Imbros.
Today, on Imbros there are more than 800 Greeks. On Tenedos they do not exceed 30. In 2013, 39 years after the abolition of the Greek language, the Turkish state approved the operation of a minority school on Imbros. Two years later, a Greek high school was established. 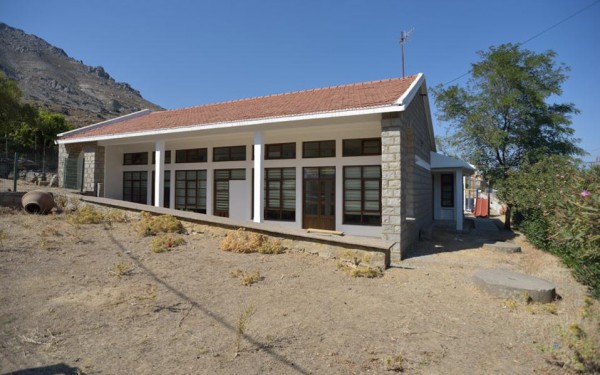 In 2016, the two Imbros schools had 13 students, with the number expected to increase as the Greeks living on the island want to perpetuate their presence on Imbros.
At the same time, Greek families started to return to Imbros and Tenedos, the islands being their places of birth. Today, after 40 years of the Greek language prohibition, Hellenism returns shyly but steadily to the two remote islands, as Greek is taught again.