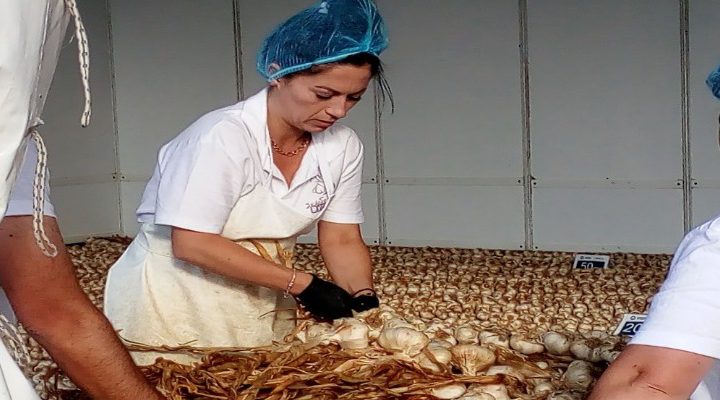 A Greek woman from Nea Vyssa, in Evros, the northeastern part of Greece, broke the world record in garlic knitting after she made a braid measuring 612 meters and 70 centimeters.
Dimitra Athanasova Tzoridou trashed the previous world record held by Hungary with a garlic braid a mere 255 meters long.
The longest garlic braid in the world was knitted at the four-day 18th International Trade Fair Alexpo 2018 in Alexandroupolis in Thrace. The bi-annual exposition promotes local businesses and entrepreneurs.
It took Tzoridou about 16 hours and 20,000 garlic heads, totaling to over two tons of garlic. After the completion of the task, the necessary paperwork was sent to officially claim a title at the Guinness World Records.
Paschalis Papadakis, head of the Evros Agricultural Economics and Development Department, said that the garlic of the Nea Vyssa region has “qualitative characteristics [that] are the best [compared to five other types of garlic], while it contains better quality and higher quantity of the allycin substance that helps ailing many diseases.”