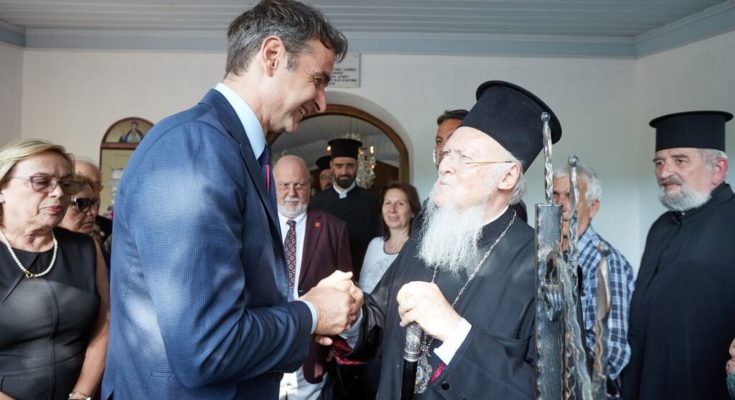 Ecumenical Patriarch Bartholomew inaugurated the Saints  Constantine and Eleni Church on Imbros on Tuesday in the presence of New Democracy Chief Kyriakos Mitsotakis.

The conservative party leader arrived on the island on Monday evening for the ceremony. On Tuesday morning he visited the Primary School of Aghioi Theodoroi, the only Greek school on the island.

Four Greek girls who are the only students attending the island’s kindergarten, welcomed Mitsotakis and his wife Mareva Grabowski by singing children’s songs.

The ND president was briefed by the Greek teachers on the problems they are facing. Mitsotakis thanked the teachers for the excellent work they are doing. Immediately afterwards, he was guided by the Ecumenical Patriarch Bartholomew to the house where the Patriarch was born and raised, as well as in a small museum dedicated to him by the village residents.

The ND president praised the work of the Ecumenical Patriarchate, and the Patriarch, thanks to whom the Greeks of Imbros have returned to their island in recent years. It is indicative that out of 168 remaining Greeks in 2000, more than 550 Greeks live on the island today, including 39 pupils and 13 infants who are born on the island.