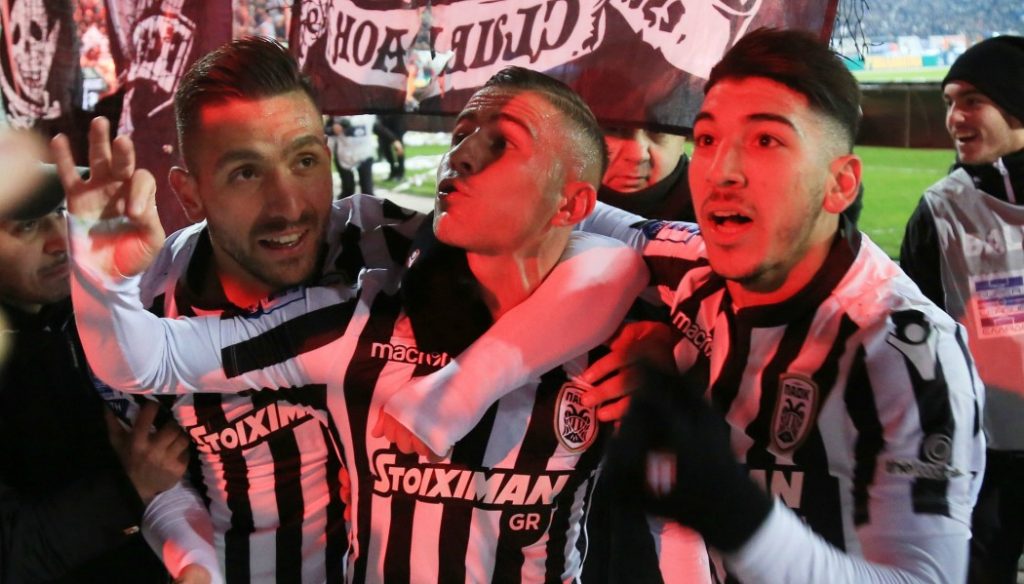 In the end, it was a single kick which turned the Greek Football Cup Final in PAOK’s favor on Saturday night in what was a gritty affair from start to finish.
When Portuguese winger and right-back Vieirinha fired home a right-footed rocket from a set piece in the 65th minute it sent the travelling northerners into raptures.
PAOK — five-time cup winners — had come to the final in north Athens’ Spiros Louis Olympic Stadium on the back of an emphatic 6-2 aggregate win over Panionis.
The Thessaloniki side was itching for revenge over AEK, having lost the league in controversial fashion to the Athenians amid a furore over docked points.
Vieirinha’s free kick which pierced the AEK wall was followed up by a Dimitris Pelkas goal in the 91st minute, wrapping up a memorable win for PAOK but also ending a season to forget for Greek football which has been dogged by controversy on and off the pitch.
As Spanish referee David Fernandez Borbalan — brought in especially to manage the explosive tie — blew up the match in the 94th minute, the stadium echoed to the sound of fireworks as PAOK players ran past police, appealing for their joyous fans to keep calm and stay off the pitch.
It had been mostly AEK in the first half, with three shots at goal blazing over the bar in the ninth, tenth and eleventh minutes alone as Argentinian Sergio Araujo and Croatian Marko Livaja both sent the ball hurtling towards the large away support massed at the PAOK end.
In the 17th minute Dutch left-winger Diego Bisewar controlled the ball on his right foot before driving it just to the right of the AEK goal, prompting an alarmed dive from ‘keeper Vasilis Barkas.
However, it was the 25th minute which first threatened to overturn the stalemate as PAOK’s Bisewar, through on goal, went down in the box. The referee blew for a penalty only to see Serbian forward Aleksandar Prijovic’s low, driving effort turned away by the left glove of Barkas.
The first half also saw no less than three yellow cards, all for PAOK players Djalma Campos, Leo Matos and Jose Angel Crespo. 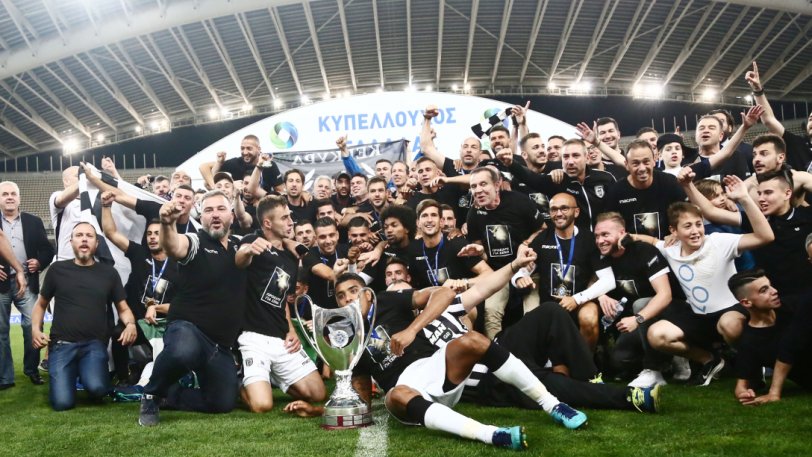 After the re-start AEK’s Livaja picked up the Athenians’ first yellow for an elbow. Four minutes later, Prijovic — trying to make amends for his first-half penalty miss — tried to chip ‘keeper Barkas who stood firm to get a right hand to the ball.
It was the 65th minute which proved to be the turning point of the match as a set piece on the left, just a few yards outside the AEK box, saw Vieirinha penetrate the defensive wall, sending a thunderbolt into the bottom-left corner which left Barkas with no chance.
From there the AEK challenge began to wilt and it suffered a body blow in the 80th minute as Ognjen Vranjes picked up a second yellow and PAOK’s Mauricio got a straight red in the same incident.
There was a flurry of second-half substitutions for both sides as well as more yellow cards until Prijovic, running down the left in the 91st minute, crossed the ball to Pelkas who drove it over the line, sending the Greek Football Cup north again for the sixth time.
Build-up
The security force presence had been intense, with lines of riot police outside the stadium and a helicopter circling overhead.
Inside the Olympic ground there were vast rows of empty seats between the two sets of vocal fans, manned by squads of riot police.
PAOK boss Razvan Lucescu — who took Super League side Xanthi to their first-ever cup final in 2014 — looked on as the away fans made their presence felt.
Meanwhile, AEK’s ‘Manolo’ Jimenez — a returnee to the club — was overseeing a side which was on the crest of a wave, having already bagged their first league championship in 24 years.
They had left perennial hopefuls PAOK behind after the northerners were docked points over an abandoned league game between the two in Thessaloniki on March 11.
Controversy
Greek football has been dragged through the mud this season with violence on and off the pitch, police injured in clashes, clubs fined and docked points and the government suspending all competitions.
In an incident that made international headlines, PAOK’s president, Ivan Savvidis, landed in hot water for striding onto the pitch during the March 11 clash with AEK sporting a handgun in his belt.
This lead to Deputy Sports Minister Giorgos Vassiliadis meeting Greek premier Alexis Tsipras and announcing that Super League and cup games would be halted indefinitely.
In other scandals, UEFA banned the once-mighty Panathinaikos club from European competitions for three years for failing to pay debts to former players.
In April, an Irish footballer — once fined €250,000 ($309,000) for attacking an Elvis Presley impersonator — went missing from training for Super League club Apollon Smyrni which then went public with its intent to fire him.
And in March, a FIFA representative visiting Greece to investigate the violent incidents plaguing the game recommended the country be suspended from the sport’s governing body.
Now, there is even talk of bringing in a Video Assistant Referee system “to contribute to the effort to restore Greek football’s lost credibility” according to one official.
But, for tonight at least, PAOK fans will savor their victory.