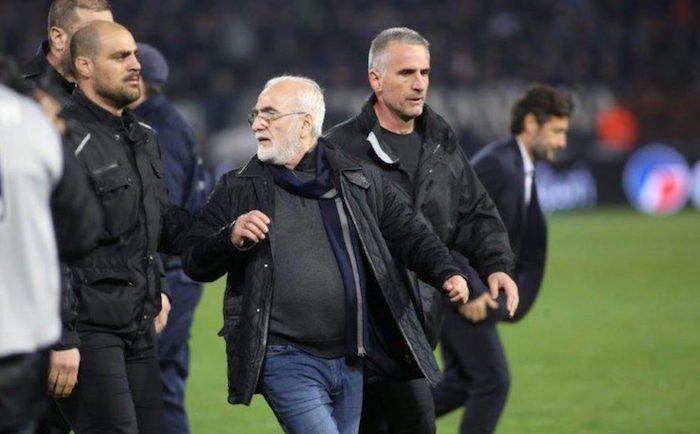 FIFA is sending a group of officials to Greece to discuss the football crisis that broke out on Sunday, after PAOK owner Ivan Savvidis stormed the field of play and tried to approach the referee while carrying a gun.
Savvidis was furious as the referee cancelled a goal his team scored against AEK in the 89th minute of the game that could determine the 2017-2018 champion. Savvidis allegedly threatened the referee, and so did PAOK Sports Director Lubos Michel with the camera showing his lips form the words “You are finished” three times.
The Greek government decided to suspend top division and cup games indefinitely. The suspension caused an outcry from the rest of the football clubs and opposition parties in parliament, as Savvidis has been shown preferential treatment by Prime Minister Alexis Tsipras on his business activities. Opposition parties and rival football clubs accuse Tsipras of protecting Savvidis with the decision to halt the championship games.
FIFA director for Europe Bjorn Vassallo said that a delegation would travel to Athens on Wednesday to discuss the latest crisis. In 2015, the Greek administration had taken a similar decision to suspend league games after PAOK fans stormed the pitch and clashed with police leaving several injured after an unfavorable referee decision.

“FIFA demands an uncompromising and robust approach in exterminating all forms of violent acts in football,” Vassallo said in a letter to Greek Deputy Sports Minister  Giorgos Vassiliadis.
European Club Association Suspends PAOK
The European Club Association on Tuesday said that it is suspending PAOK as a member with immediate effect.
FIFA is demanding swift results in the attempt to restore order as Greek football is marred by violence and corruption, while sports justice often fails to punish clubs for their fans’ misbehavior.
Savvidis apologised for his acts on Tuesday saying that Greek football is “completely sick” and he is fighting to clean it up. He said that he and his family are “hostages” to the sickness of Greek football.
In his public apology Savvidis denied he threatened the referee or AEK official Vassilis Dimitriadis, as the latter has complained.