GRNews
GreekReporter.comGreeceLord Byron: The Romantic Poet Who Died for Greece

Lord Byron: The Romantic Poet Who Died for Greece

By Philip Chrysopoulos
April 19, 2018
Facebook
Twitter
WhatsApp
Linkedin
Email
Lord George Gordon Byron is one of the first and best-known philhellenes, who actively participated in Greece’s War of Independence, eventually losing his life in Missolonghi on April 19, 1824.
Born in 1788, George Gordon Byron became the leading figure of British Romanticism at the beginning of the 19th century, living a full life in every aspect and dying young, something that made him a romantic legend.
Young, handsome and aristocratic, Byron lived in exuberance and had innumerable erotic romances and scandalous relationships although his heroic acts became part of a wider historic struggle.
For Greeks, Λόρδος Βύρωνας, as he is called, epitomized the word ‘philhellene’ as he died at the age of 36 for the freedom of a homeland that was not even his own.
Byron was also a bitter opponent of Lord Elgin’s removal of the Parthenon sculptures, denouncing the “theft” in the poem The Course of Minerva. 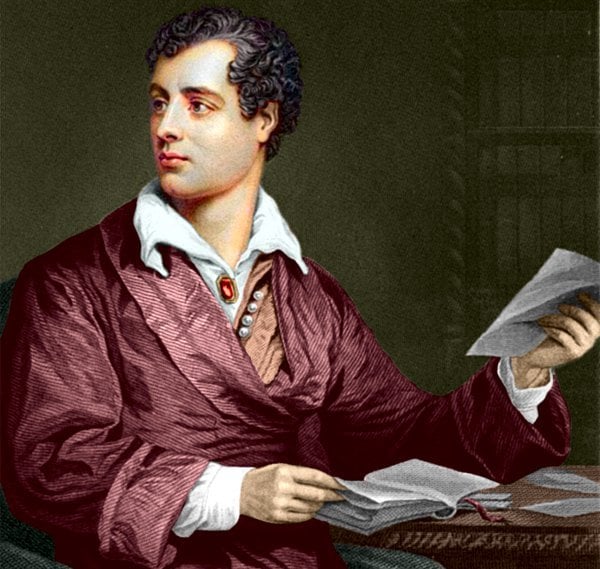 Early years
George Gordon Byron the 6th was born on Jan. 22, 1788 in London, of an aristocratic family. At the age of 10 he inherited the English Barony of Byron of Rochdale from his uncle, becoming ‘Lord Byron’.
He was born with a problem in the right leg which left him with a limp that followed him throughout his life and affected his character and work. His life changed drastically when he became a peer of the realm.
In 1803, Byron fell in love with his cousin Mary Chaworth. The unfulfilled love found creative expression in his first erotic poems. From 1805 until 1808, Byron attended  Cambridge University, with sexual scandals and excesses being prominent in his student years. Horse riding, boxing and gambling were added to his pastimes and addictions.
At the age of 21, Byron entered the House of Lords, and the following year he began his long journey to the Mediterranean, where he would write one of his most famous poems, Childe Harold’s Pilgrimage, the subject of the impressions of a young man traveling on unfamiliar terrain.
In his tour of the Mediterranean in 1809, Byron visited Greece for the first time and immediately fell in love with the country. After meeting Ali Pasha, the poet traveled all over the country and visited all the monuments of Greek civilization.
At the same time, he fell in love with the daughter of British consul Theodoros Makris, and dedicated his famous poem Daughter of Athens (1809) to her. He stayed in Greece for another 10 months, following various adventures such as swimming in the Straits of the Hellespont (better-known as the Dardanelles), imitating the feat of ancient Greek hero Leander.
In 1811, suffering from malaria, he decided to return to Britain. That year he lost his mother but the publication and success of The Childe Harold’s Pilgrimage, along with a series of new sex scandals and stormy romances, made him overcome his grief.
His subsequent poem collections brought him even more money, which he spent profusely on distractions and sexual adventures, with debts accumulating once more.
As a way of escaping ephemeral relationships, he married Ana (Annabella) Isabella Milbank, a highly educated and cultivated woman, in January 1815 and in December of that year their daughter, Augusta Ada, was born.
The marriage, however, did not last long, as in January of the following year the union ended, with Anabella leaving Byron, who returned to a life of debauchery worth of a troubled romantic poet. 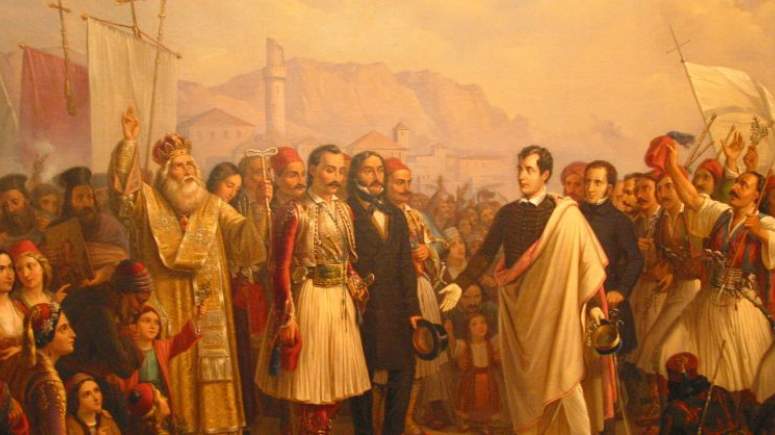 Self exile and participation in Greece’s War of Independence
In April 1816, in a particularly hostile atmosphere for himself, forcing him to avoid public appearances, Byron left England, never to return. He traveled to Geneva, where he befriended the writer Percy Shelley and his wife, Mary.
In Italy he continued his erotic adventures that were captured in his collection Don Juan. Being in Italy, he actively supported the liberation movement that had erupted.
In 1823 Byron received an invitation to actively support the Greek struggle for independence from Ottoman rule. He spent a tremendous amount of his personal fortune to repair ships of the Greek fleet and set up his own military squad, composed of fighters from Souli.
After staying for six months in Cephalonia, he decided to move to Morias (Peloponnese), but he finally stayed in Missolonghi, where he contacted Alexandros Mavrokordatos, to whom he gives another large amount of his personal fortune for the needs of the Greek revolution.
At the same time, he acted as a channel of communication between Greek fighters and British philhellenes to conclude the first revolutionary loan, as a member of the London Philhellenic Committee.
Seeing the political controversies that had already erupted among the leaders of the Greek rebels, he called for the exclusive use of money for the liberation of the nation and not for political purposes.
Along with his concern for the military course of the Greek Revolution, he assumed the role of the bridge between the chieftains. He points out in his letter: “As I come here to support not a faction, but a nation and to work with honest people rather than speculators or abusers (charges that are exchanged daily among the Greeks), it will take much effort to avoid and I understand that this will be very difficult, because I have already received invitations from more than one of the parties fighting, always on the grounds that they are the true representatives of the nation.”
In a letter to a trusted friend in September 1823, he complained: “The Greeks seem to be at a greater danger among them, rather than from the enemy’s attacks.”
Trying to balance between the inner fights among the Greek Revolution leaders, Byron fell ill in February 1824. The great philhellene died on April 19, 1824 in Missolonghi, at the age of 36.
The lament of his death was spread not only among the Greek freedom fighters who saw him as a hero of their own, but also in England, where the death of the distinguished romantic poet was mourned.
Dionysios Solomos – Greece’s national poet who wrote the National Anthem – eventually composed a long ode in Byron’s memory.