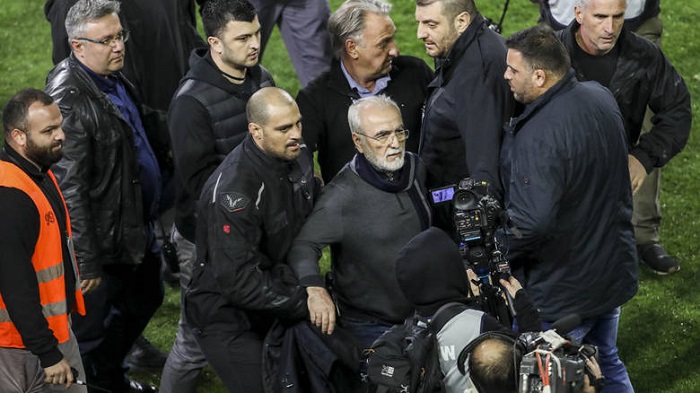 The owner of PAOK Thessaloniki reappeared on Tuesday to apologize following his dramatic pitch invasion on Sunday night with a holstered firearm.
Ivan Savvidis, who was sought by police and had apparently disappeared for at least 36 hours, issued a statement in which he apologized for the incident that sparked a media feeding frenzy and the suspension of the Greece’s Super League.
Savvidis writes that he is sorry for his behavior, which he claims was caused by his anxiety to protect PAOK fans from “provocations that may have resulted in fatalities”.
He asked his team to leave the pitch after PAOK had a goal ruled offside in the 89th minute in the top-of-the-league clash against AEK and then marched towards the referee with two bodyguards before being pulled back.
However, Savvidis maintains he did not threaten anyone and that he and his family are “a target of a smear campaign by the corrupt football establishment”.
“Despite the constant attacks I take on all levels, I will continue to strive for a fairer football.
“Football matches should be won in the pitch and not at the courts,” he adds.
On Monday, Deputy sports Minister Giorgos Vassiliadis, speaking after a meeting with Prime Minister Alexis Tsipras, said Greece’s Super League would be halted indefinitely.