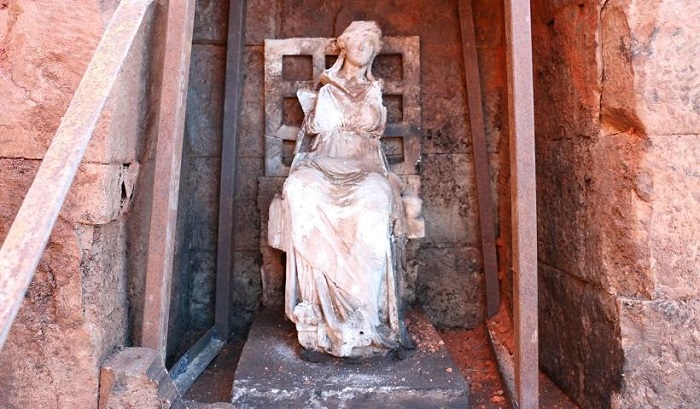 A Turkish site where a 2,100-year-old statue from the same civilization as King Midas was once unearthed is now in danger of being dynamited by a quarrying operation.

Kurul Castle, in the Turkish Black Sea port city of Ordu, is near where an andesite quarry is being dug out of the land, archaeologists and environmental groups warn.

In 2016, excavations revealed an ancient marble sculpture of Kybele, the ancient “Mother Goddess”, in Kurul Castle, during one of the first archaeological digs ever undertaken in the region.

Now again, in that same area, dynamiting is blowing up historic sepulchers, or rock tombs, and further threatening the remaining areas, including Kurul Castle, the Turkish daily Hurriyet reports.

“We don’t know who to complain to, or what to do,” local environmentalists have said.

“Every day, those responsible for the stone quarry destroy the historic castle’s foothills with dynamite. We are anxiously waiting to see if the castle will crumble,” they added, according to the Turkish paper.

Kybele, sometimes called “Cybele” in Greek and Roman writings after her worship spread west across the Mediterranean, was a mythical Anatolian mother goddess figure thought to have been revered by the Phrygians, whose civilization was based in central Turkey, not far from the Black Sea.

Dominant in the region from circa 1200 BCE to 700 BCE, the Phrygian civilization had many important ties to ancient Western mythology.

The famous King Midas, whose touch was able to turn ordinary objects to gold, was said to have been a Phrygian king.

Other notable mythological figures from Phrygias include King Gordias, the man who created the Gordian Knot which Alexander the Great so famously unraveled; and in the Iliad, the Phrygians were said to have been allies of the Trojans, coming to their aid during the Trojan War.