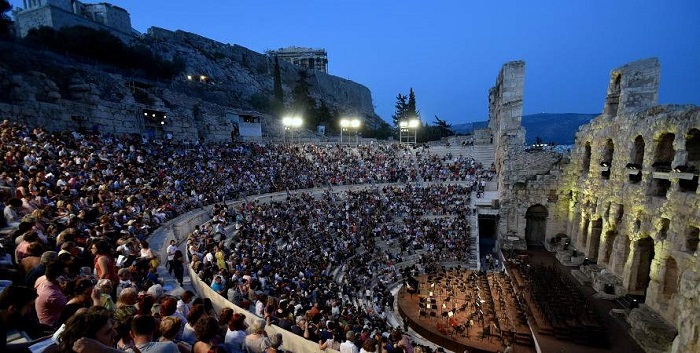 This year’s Athens Festival will include 87 performances in a reduced but more targeted program than 2017’s, organizers said this week.
The annual Greek festival includes performances and events mostly focused at Irodio (Herod Atticus theatre) in Athens and the theatre of Ancient Epidaurus. The Epidaurus Festival schedule was presented in November 2017.
Artistic director Vangelis Theodoropoulos said during the program’s presentation at the National Museum of Contemporary Art that this year’s festival schedule focused on bringing a classic repertoire to the Irodio and internationally renowned musicians.
The program includes Italian orchestra Il Pomo d’ Oro specialising in baroque and classical music, Moscow’s Tchaikovsky Symphony Orchestra, British violinist Nigel Kennedy, American actor Bill Murray and rock musician Sting.
The Athens Festival will open at Irodio with Verdi’s “Nabucco” on June 1 and conclude with a performance of Bizet’s “Carmen” by the National Greek Opera on July 31.
The Pireos 260 venue will host modern Greek and international theatre performances, including Chekhov’s “Three Sisters” by Russian director Timofei Kulyabin.
It will open on June 1 with a performance of “The Pursuit of Happiness” by the U.S.-based Nature Theatre of Oklahoma.
More details about the Athens & Epidaurus Festival are available at www.greekfestival.gr.
Source: AMNA