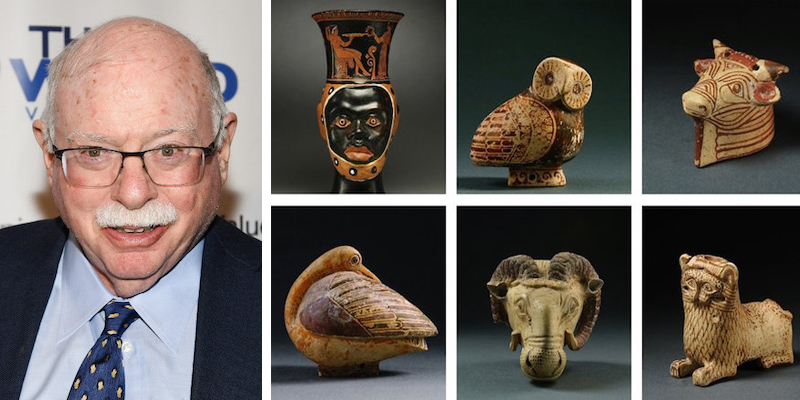 Authorities seized several Greek antiquities from the home and office of billionaire Michael H. Steinhardt on Friday, on the grounds that they have been looted, a New York Times report says.

Mr. Steinhardt, a philanthropist and hedge fund manager, is a collector of ancient Greek art and a gallery at the Metropolitan Museum of Art is named for him. According to the report, the 77-year-old declined to comment on the seizure of at least nine pieces from his private collection at his home and office.

Manhattan district attorney Cyrus R. Vance Jr., investigates auction houses, galleries, museums and private collections in an effort to repatriate looted antiquities discovered in New York City to their countries of origin. In recent months his bureau has seized and returned to their homes antiquities from Lebanon, Italy and Pakistan.

Mr. Vance formed an antiquities-trafficking bureau, putting it under the leadership of Matthew Bogdanos, an assistant district attorney who is a classics scholar and has headed most of the investigations. Mr. Bogdanos, who is the son of Greek immigrants, had led an investigation into the looting of Iraq’s National Museum while on active duty as a colonel in the Marine Corps Reserves in 2003.

According to the New York Times, among the pieces seized from Mr. Steinhardt was a Greek white-ground attic lekythos from the fifth century B.C., depicting a funeral scene with the figures of a woman and a youth. It is worth at least 380,000 dollars.

Also seized were Proto-Corinthian figures from the seventh century B.C., depicting an owl and a duck, together worth about 250,000 dollars. The other pieces included an Apulian terra-cotta flask in the shape of an African head from the fourth century B.C.; an Ionian sculpture of a ram’s head from the sixth century; and an attic aryballos, from the early fifth century. The objects were all bought in the last 12 years for a total cost of 1.1 million dollars according to the warrants.