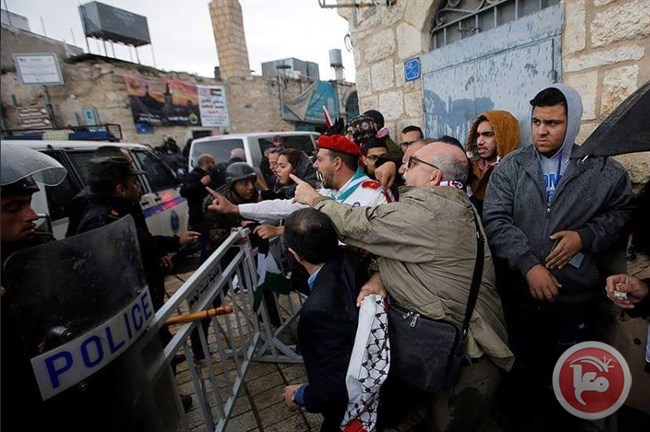 Palestinian Christians protested violently against a visit by Greek Orthodox Church Patriarch of Jerusalem, Theophilos III, to the West Bank city of Bethlehem on Saturday, according to Ma’an news agency.

Theophilos III, along with several other religious and political figures, were visiting Bethlehem as part of celebrations for Greek Orthodox Christmas Eve, on January 6, according to the Julian calendar.

Despite a strong presence of Palestinian security forces who attempted to open roads near Bethlehem’s Manger Square for the patriarch’s car, angry protesters threw stones and smashed the windows of the car the Patriarch was riding, while shouting slogans against him.

Palestinian Christians demand that Theophilos III is stripped of his titles and be removed from the church. They accuse him of orchestrating the sale of more than 500 dunams (123.5 acres) of Palestinian land belonging to the Arab Orthodox Church in Jerusalem to Israeli entrepreneurs belonging to Zionist and settler groups, the Ma’an report says.

Detractors have accused Theophilos III and the Greek Orthodox patriarchate of contributing to Israeli plans to “Judaize” Jerusalem by selling or leasing off land to Israeli authorities and businesspeople, betraying the church’s responsibility to protect Palestinian lands that have been under its care since the Ottoman period.

Why Thanksgiving Turkeys are Much More Expensive This Year