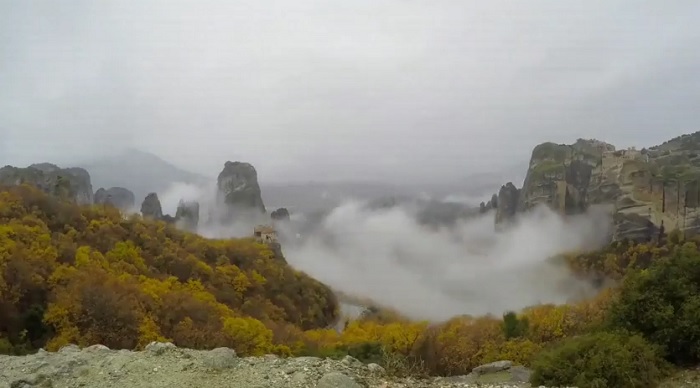 Meteora is a rock formation that is home to 24 monasteries.
A blanket of fog could be seen moving through Meteora, Greece, on December 1.
Minh Phan, a meteorologist traveling in Greece, captured the footage. Phan told Storyful, “Valley fog is common in and around these mysterious rock formations.”
The monasteries emerged on the countless summits of the rocks from the 14th until the 16th century, 6 of them remaining to be explored and admired by all.
These monasteries became the centers of the Orthodox creed in the Byzantine era, having produced some of the best pieces of religious art and craft and still possessing a collection of precious manuscripts, which today are on display in their museums.
The Meteora monasteries have been included in the UNESCO World Heritage List and the Meteora-Antichassia region has been officially declared a Natura 2000 Ecological Zone by the Greek Ministry of Environment, for the protection of rare species of birds and flowers.