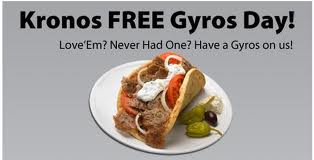 The gyros, the most popular fast-food delicacy of Greeks around the world, may be in danger after an EU Parliament vote to ban phosphate in frozen kebab meat.
The European Union’s legislature is moving to ban the phosphates used in the slabs of meat at the heart of kebab; the popular street snack that originated in Turkey and which is today’s Greek gyros.
EU lawmakers are citing health concerns based on studies that linked phosphates to cardiovascular disease.
But owners of takeout restaurants and industry groups claim the additives are needed to keep seasoned kebab meat juicy and flavourful, both during transport and on the vertical retail rotisseries where it is cooked.
Interestingly enough, some sausages containing phosphates are allowed to be sold in EU countries and would not be affected by any move involving kebab meat.
The kebab issue came up when the EU’s executive Commission proposed to officially authorize the use of phosphates in the lamb, mutton, beef or veal that goes onto a shop spit. Some other meats had previously received such clearance.
The proposal ran into trouble in the European Parliament earlier this week when its Health Committee voted 32-22 to oppose it, with Green MEPs taking the lead on the opposition.
Based on more recent health studies, legislators expressed concern that carving out blanket approval for kebab meat could put Europeans at greater risk of heart disease.
A rejection by the full Parliament when it meets in two weeks would send the proposal back to the Commission — and keep the mighty kebab lingering in limbo.
Turkish food ventors in Germany, where kebab is a very popular street snack, are up in arms. Greek gyros makers are also watching the debate, which could determine the snack’s future, closely.
Source: AP

A group of Greek volunteer mechanics went to Evia fix vehicles that were heavily damaged in the flood in August of 2020.
Cyprus

Halloumi and Feta may just be the most iconic food products from their respective countries of origin, Cyprus and Greece.