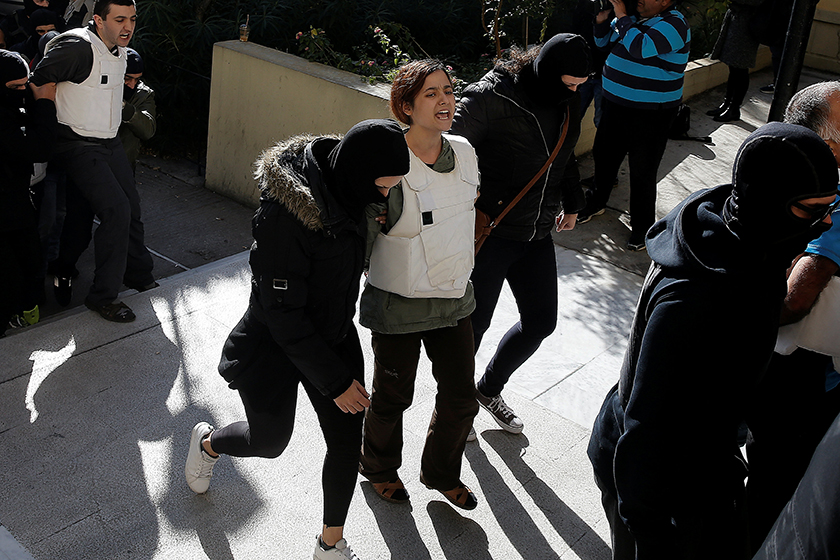 Nine Kurds carrying Turkish passports were charged with terrorism-related offences on Wednesday, and accused of hoarding explosives and of links to an outlawed Kurdish militant organisation responsible for suicide bombings in Turkey.
The arrest of eight men and a woman in early-morning raids at three locations in central Athens on Tuesday came days before an expected state visit by Tayyip Erdogan; the first by a Turkish president to Greece in 65 years. Greek officials say the two events are unrelated.
Police officials said they were being questioned for alleged links to the leftist DHKP/C, a far-left group blamed for a string of attacks and suicide bombings in Turkey since 1990.
Their lawyer said the individuals; who have not been named, were ‘struggling against a fascist regime’ and had denied any wrongdoing.
They were charged with setting up and being members of a criminal organisation, terrorist-related acts of supply and possession of explosive materials, illegal possession of firearms, smoke bombs and fire crackers, court sources said.
The handcuffed individuals; who were escorted into a central Athens court wearing bullet proof vests, have not entered a formal plea.
“They are refugees,” lawyer Alexandra Zorbala said. “Some have sought, others have received asylum. They are fighters who are struggling against a fascist regime, against torture and thousands of arrests.”
One of the charges they face is resisting arrest. At least one of the defendants entered the courthouse with a black eye.
One of the detainees had been wanted by Greek police in connection with an arms and explosives haul off the Greek island of Chios, close to the Turkish coast, in 2013.
Source: Reuters

Police have made over 30 arrests in Thessaloniki after they clashed with protesters who were demonstrating against a new education bill.
Diaspora

Marketing genius can take many forms -- from the "Music Man" salesmen of the early 1900s, selling band instruments to poor townspeople -- to...
Cyprus