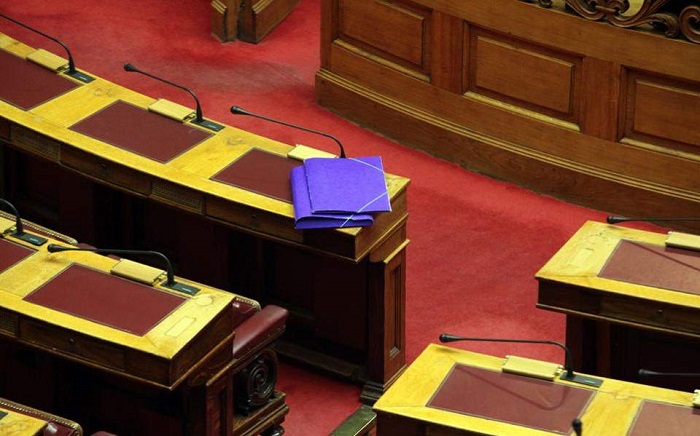 The Greek 2018 state budget tabled on Tuesday night in Parliament foresees that the country will return to capital markets next year to strengthen liquidity in the secondary bond market.
The budget plan envisages, among others, a new series of bond issues of fixed interest, along with completion of a bond swap programme this month, in the framework of a programme to manage existing debt portfolio liabilities based on the model of a recent successful issuing of a new five-year bond and a bond exchange plan, both in August 1, 2017.
The Greek state’s borrowing needs in the first half of 2017 were mostly covered by short-term domestic borrowing, monthly issues of Treasury bills of three- and six-month duration and repos. The country also received an instalment of 8.5 billion euros from the ESM, and expects the disbursement of 5.5 billion euros after completion of the third review of the programme.
Primary surplus of 3.82 pct of GDP
The Greek 2018 state budget envisages a primary surplus of 3.82 pct of GDP and an economic growth rate of 2.5 pct.
Next year’s budget, the last to be tabled in the framework of the memorandum, foresees the primary surplus will exceed a 3.5 pct of GDP target agreed with the country’s creditors, with the Finance ministry reassuring that fiscal efforts already made, lifting of economic uncertainty and a significant improvement of economic climate were adequate factors for the safe execution of budget goals.
The primary surplus this year will reach 2.44 pct of GDP, including an 1.4 billion euros social dividend payment. The budget estimates an economic growth rate of 1.6 pct this year, with the country’s GDP rising 178.579 billion euros, rising to 184.691 billion in 2018.
This prediction is based on a positive contribution from private consumption (up 0.8 pct of real GDP), speedier increase in employment and a continuing decline in unemployment.
Also a positive contribution from gross fixed capital formation (by 1.4 pct of real GDP), expected to grow with double-digit rates because of a more favourable investment environment, a further improvement in the real deficit of the balance in goods and services, by 0.2 pct of GDP, amid increases in export and import activity.
Private consumption is projected to grow by 1.2 pct in 2018, after a 0.9 pct increase this year, while public consumption is projected to rise by 0.2 pct in 2018 from +0.9 pct this year. Private investments are expected to grow by 11.4 pct next year, from +5.1 pct in 2017, while imports are expected to grow by 4.6 pct and exports to grow by 3.8 pct in 2018.
The unemployment rate is projected to fall further to 18.4 pct in 2018, from 19.9 pct this year, while the country’s harmonized inflation rate to slow to 0.8 pct in 2018 from 1.2 pct in 2017. The country’s public debt is expected to rise to 179.8 pct of GDP in 2018 (332 billion euros) from 178.2 pct of GDP (318.3 billion) this year.
The state budget documentation stressed that achieving these goals needed completion of a series of actions included in the basic macro-economic scenario: a smooth progress of a support programme through the ESM until its completion in August 2018, a smooth and safe return to international capital markets and the creation of an adequate safety cash reserve against any future turbulence in international markets, implementing medium-term measures to ensure the sustainability of public debt and prevailing of smooth conditions in international geopolitical and economic environment.
Social dividend
Greece’s 2018 state budget envisages payment of a social dividend to 1,459,834 households, based on the criteria set for its distribution, with an average dividend payment of 483 euros per household. The total number of eligible households’ members reaches 3,472,734 persons, or 32 pct of the country’s population.
The state budget envisages that the average social dividend is 610 euros for households included in the first category, 547 euros for the second category and 403 euros for the third category.
Payment of the social dividend was made feasible following a significant overperformance of a target for a primary surplus of 1.75 pct of GDP in 2017.
Parliamentary process
The 2018 draft budget was tabled in parliament by Alternate Finance Minister George Chouliarakis on Tuesday evening and is expected to be voted at the plenum on December 22.
The budget will be introduced to the parliamentary committee on economic affairs on November 23 for four debates and will then proceed to the plenum on December 18 for five sessions. The actual vote will be held at midnight on December 22, with a roll call vote.
Receiving the USB stick containing the budget by Chouliarakis, Parliament President Nikos Voutsis wished that the next budgets “will be better.”
More taxes says New Democracy
The draft budget for 2018 brings more taxes and cuts to households and businesses and anemic growth, New Democracy said in a press release on Tuesday, commenting on the tabling of the new budget.
The party said the budget shows that this year’s overshooting of the fiscal target is not driven by economic growth, as growth is once again cut to 1.6 percent instead of 2.7 percent of the original forecast.
“It is instead the result of the government’s conscious, merciless tax raid and of an internal default,” ND said, adding that this is reflected in the foreclosures, the delays in granting pensions and the suspension of public investment expenditure.
“The government has imposed a total of 27 new taxes and 21 pension and social benefit cuts, had lowered -twice- the tax-free personal income threshold, has increased the most unfair indirect taxes and created a new generation of the 360 euros,” the party continued. “A change of economic policy is absolutely necessary.”
Aource: ANA-MPA