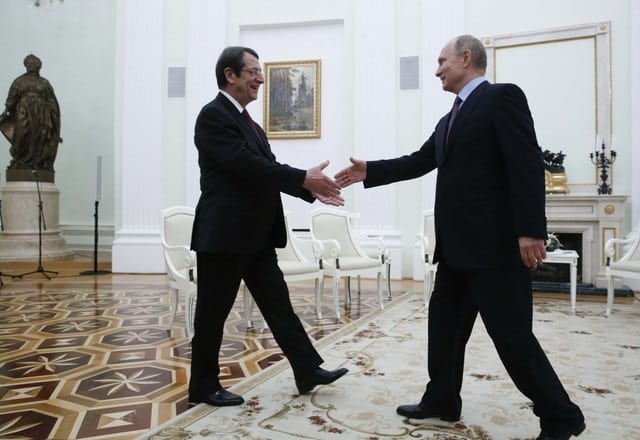 “We will discuss a whole range of our relations and certainly, the international issues, the domestic settlement of the Cyprus problem,” the Russian leader said. “You know that Russia has always called for a fair settlement.”
Anastasiades was greeted at the Kremlin by Putin and they had a private conversation before a meeting between the full delegations from both sides to sign a number of bilateral agreements.
Putin noted that the meetings with the Cypriot president are always substantial and constructive. There is no doubt about this taking into account that the two countries have been developing relations for a long time, he said. The Soviet Union was the first country to recognize the independence of Cyprus.
On his part, Anastasiades referred to the historical, cultural, religious ties between Russia and Cyprus, adding that cooperation between the two countries was excellent.

He expressed the gratitude of the Cypriot people and the Cyprus government “for the consistent and stable support of Russia that is based on principles with regard to a solution to the longstanding Cyprus problem.”