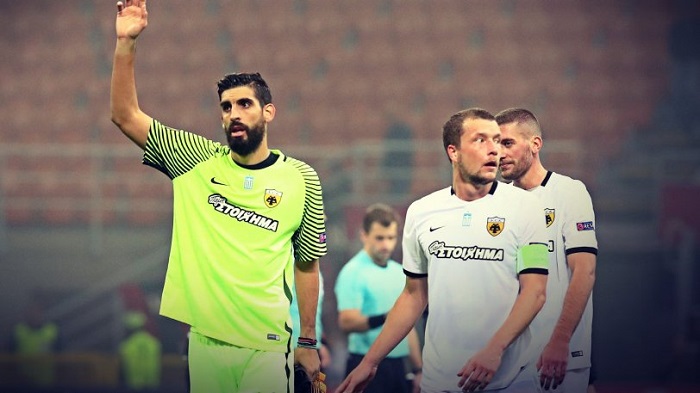 AEK’s goalkeeper Giannis Anestis produced a memorable performance to help the Greek side secure a well-earned draw against Italian giants AC Milan at San Siro for the Europa League.
The Rossoneri failed to create many clear-cut opportunities and, in the few times they did, AEK’s goalkeeper proved unbeatable.
It was AEK who came closest to a first half opener as Mateo Musacchio gifted an opportunity to Andre Simoes, who was unable to hit the target from a narrow angle.
Milan showed more life after the restart. Giannis Anestis was called on to parry Hakan Calhanoglu’s low drive in encouraging signs from a more fluent Milan.
Montella turned to Nikola Kalinic after the hour and the former Italy striker might have wished the next chance had fallen to his Croatian substitute as Cutrone failed to squeeze a finish past Anestis when the ball broke kindly in the area.
Anestis did superbly to smother and stop Suso finding the decisive goal after he had raced unchecked into the penalty area, and the goalkeeper rose to the occasion yet again in stoppage time when he blocked a dangerous Calhanoglu free-kick, marking the final frustration for Milan.
The final whistle was greeted with jubilant reactions from the AEK players and bench, as the Greek team pulled off one of the best results in their history to keep their Europa League campaign alive.
Both teams remain unbeaten in Group D, with Milan top on seven points and AEK second with five after three matches.
The result means AEK avoided defeat for the first time in three visits to Milan, and the Greek side put an end to Milan’s six-match winning streak in Europe.