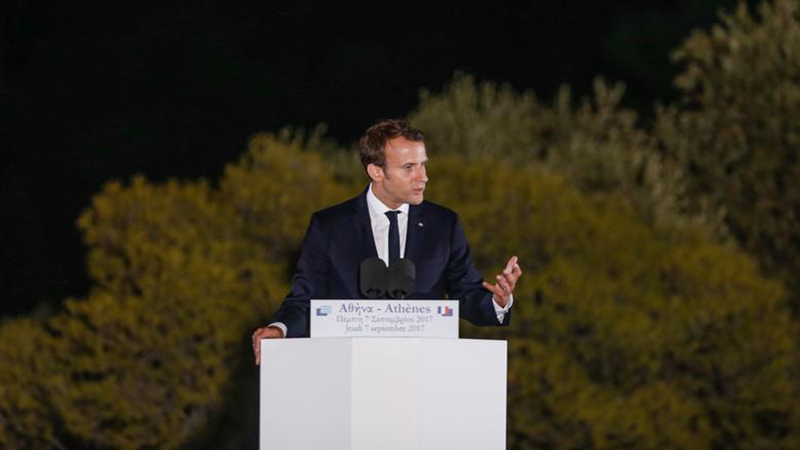 The stage of the ancient Greek public forum in the Pnyx hill was the perfect set for a memorable, inspirational, pan-European speech and French president Emmanuel Macron tried his utmost to rise to the occasion.
Borrowing the preacher-like techniques which turned Barack Obama’s speeches into political seminar material, the French president attempted to inspire a tired, disenfranchised and extremely polarized European public.
His 50-minute “New Europe” speech, appropriately starting in Greek, was a balancing act between the ancient democratic values born in Greece and the need for a more open, more democratic, more inclusive European Union.
He talked about a six-month pan-European debate he will be proposing in early 2018, in order for citizens to express their hopes and dreams for a different EU, based on the peoples’ wills and aspirations.
He chastised the current state of European institutions, accusing them of straying from the path of the peoples’ needs, leading them to flirt with extreme and demagogic ideologies. His attack on the existing institutions was the furthest any pro-European politician has ever traveled on the road of criticism.
But there was no tangible plan presented for his so-called “road map” to a deeper and more democratic (European) union in his speech. Diving deeply into phrases and ideas from past pioneers of the European spirit, Macron looked like a rising preacher trying to inspire, more than a realistic politician proposing definite structural reforms.
Only time will tell whether this iconic speech will have any real effect on the minds and spirits of the desperate European citizens – much less on any actual structural turn of the troubled EU institutions.
If nothing else, Macron’s new European proclamation has established him as an opposing force to the cruelly realistic European approach of German chancellor Angela Merkel. What remains to be seen is whether he also has the political inspiration and gravitas to actually oppose her.