'Was Andreas a Liar?': Tsipras Article on PASOK Founder in 'Documento' 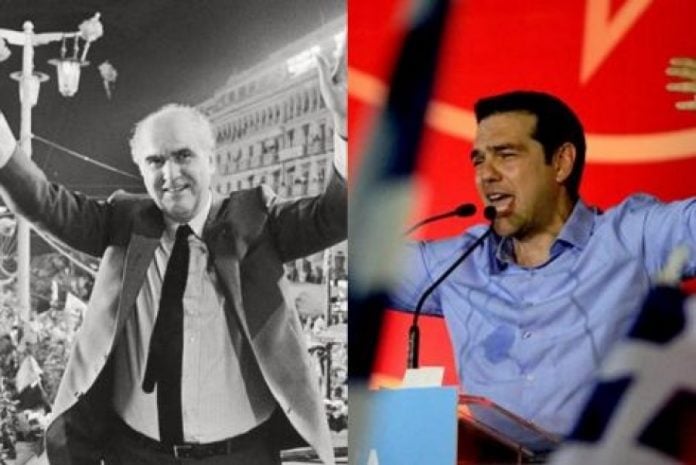 In an article appearing this Sunday – on the same date as PASOK founder Andreas Papandreou announced the formation of his new party in 1974 – Prime Minister Alexis Tsipras tracks PASOK’s meteoric rise from the political fringe to mainstream politics, during two turbulent decades dominated by its charismatic and controversial leader. The article was published in the Greek newspaper “Documento” under the headline: “Was Andreas a Liar?”
In this, Tsipras asks how it was possible for a small political party carrying the stigma of extremism to become transformed in just a few years to a mainstream party vying for power and shaping events after the return of democracy. “How did the PASOK of victory and change,” he added, “end up as the ally of the hard Right?”
The prime minister listed factors such as an accumulated crisis of representation for the “popular social forces of the post-civil war period,” as well as a radicalization of the working and lower middle classes of the time, who deeply questioned state and economic structures. He also referred to Papandreou’s personal charisma, as a focus of demands for change, and the virulent attacks on him by the establishment of the time as a populist “investor in deceit and illusion”, a “crowd-pleaser” and a “liar”.
“The truth was that he had the political instincts to diagnose the historic moment of the return to democracy, the demands and great potential that it would unlock,” Tsipras said.
The article also touched on a series of strategic concessions that gradually eroded PASOK?s radical profile. “From the party of change we crossed to the change of the party,” Tsipras wrote, noting that PASOK eventually served as a hothouse for “decentralization of corruption, degeneration of ideas and people, cynicism and cheating the popular will”. This trend dominated completely after Papandreou’s death, making PASOK what it was today, he added.
Swept up in the tide of neoliberalism, the new PASOK became the opposition to the so-called “old PASOK” and passed from a “sort of neoliberalism with a human face” to becoming an ally of the hard right in imposing memoranda, Tsipras said.
The prime minister ended his article with a reply to those accusing SYRIZA of being a “successor-party” to PASOK, stating that the differences can be see with a naked eye.
“If one clears away the mud about populism, demagoguery and lies that supposedly are shared between the “old” PASOK and the new Left, one understands that behind it lies the same great fear. The fear felt by the establishment, the elite … in case there is a resurgence to the forefront and in the news of the popular struggles of the great and constant demands for national independence, social justice and democracy that allow the people to truly exercise power,” he said.
(Source: AMNA)