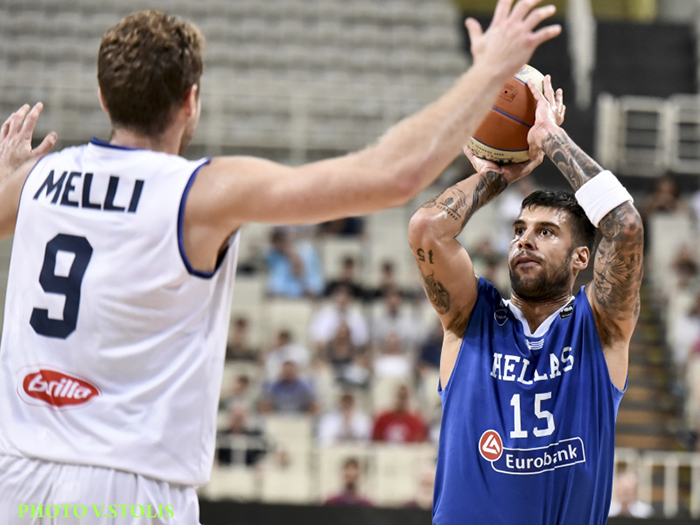 In their second tough friendly against Italy, the Greek national basketball team managed their first win in the three-day Acropolis tournament, by beating the Italians 73 – 70 in Overtime.
Playmaker Nick Calathes and point-guard Kostas Sloukas nailed threes in the end of overtime for a thrilling 73-70 win.
Greece won the first period 20-16, but the guests reduced the gap to just two points at the halftime. Greece posted another 17-14 run in the third period, while Italy tied it all at 64-64.
In overtime Nick Calathes and Kostas Sloukas gave Greece a five-point advantage in the mid of the extra period and that proved to be more than enough for a final victory.
George Printezis top-scored for the winners with 19 points and Giannis Bourousis poured in 12. Italy’s Daniel Hackett ended up with 19 points in a loss, whilst Ariel Filloy and Nicolo Melli had 10 each in a loss.
The win didn’t do much to disguise either the obvious performance issues, or the personal rivalries which appeared in the team after the announcement by NBA star Giannis Antetokounmpo that he won’t be playing in the upcoming Eurobasket tournament, due to a knee injury.
In the last training session before the Italy game, center Giannis Bourousis and point guard Nikos Pappas got in a fistfight, with teammate Giannoulis Larentzakis attempting to stop them and earning a black eye for his efforts.
Tonight Greece are facing Serbia, while Georgia are playing against Italy.
Beating both Greece and Serbia in the three-day tournament, Georgia will probably the unexpected winners of the Acropolis. This is the first time Greece have failed to secure the Athens tournament title in 20 years.