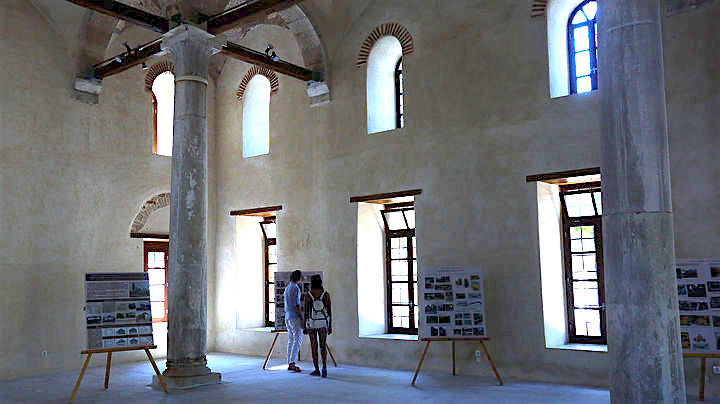 A photographic exhibition on the work completed by the Athens Ephorate of Antiquities in the past two years will signal the opening of the fully restored Fethiye Mosque in Monastiraki to the public, the Ephorate said on Saturday.
The 17th century Ottoman monument, one of the most important historic buildings in Athens’ historic center, will operate as an exhibition venue for photography or antiquities, the head of the Athens Ephorate of Antiquities told the Athens-Macedonian News Agency.
“We started with a photographic exhibition covering all work of the Athens Ephorate of Antiquities from 2015 to 2017, essentially all NSRF projects, as well as current activities such as publications, restoration and redevelopment projects,” Eleni Banou said.
The exhibition is the first cultural event hosted in the venue and will be followed by another exhibition on Roman emperor Hadrian which will include ancient artifacts. The photographs present EU funded restoration and maintenance work done in Odeon of Herodes Atticus, the Choragic Monument of Thrasyllus and the Asklepieion in the southern side of the Acropolis Hill, and several Byzantine churches.
“We will add some large photographs that will lend a theatricality, which is something the venue needs, given its size and height,” she said.
The exhibition’s opening hours are the same as those of the Roman Agora (08:00-17:00), and there is a possibility to extend the opening hours in autumn (08:00-20:00).
The monument is located on the northern side of the ancient Roman Agora in Athens, near the Tower of the Winds and is a listed building. It was built on the ruins of a Christian basilica from the middle Byzantine period (8th-9th centuries), which was converted into a mosque. Initially it was believed its construction was completed to coincide with the visit to the city of Sultan Mehmed the Conqueror in 1458. However more recent studies, combined with excavation data, led to its redating and its integration in the second half of the 17th century, probably between 1668-1670.
It was built according to the architectural style of “quatrefoil” or “clover-leaf-cross-in-square”, as its broad central dome is supported by four quadrangles in cruciform arrangement.
In autumn 2010, the Ministry of Culture ordered the emptying of the building from the various antiquities stored there, and the beginning of the process to restore it and open it to the public.
(Source: ANA-MPA)

The Serene Charm of Sikinos