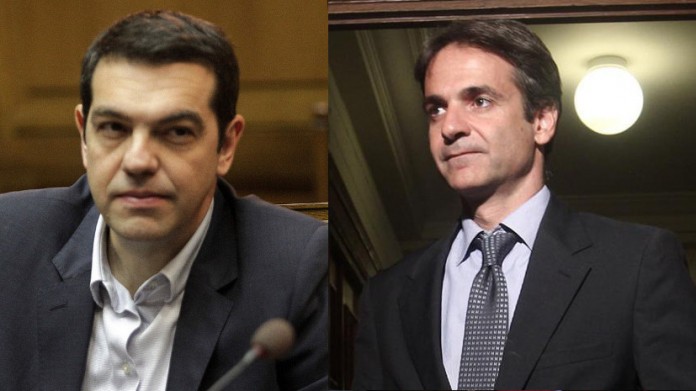 The Greek parliament discussion might have been about the government’s education bill, but Greek PM Alexis Tsipras and main opposition leader Kyriakos Mitsotakis had verbal disputes about all current political issues.
The political bickering between the two leaders included the conclusion of the May programme review, the former Fin Min Yanis Varoufakis’ disclosures concerning the early 2015 negotiations with the European Institutions, the dire straits of the Greek education system and the charge of “Rouvikonas” anarchist group members last week in the Greek parliament.
“We must safeguard the free access to all ideas and expressions in the universities with respect to the democratic procedures. The only way to solve the problem is dialogue in the universities and not police interventions that remind us of other periods”, said Prime Minister Alexis Tsipras to the parliament plenum during the debate on the draft law “Organisation and Operation of the Higher Education.”
“We are not afraid of the students’ movement. We restore the asylum for the free access to all ideas in the universities provided they respect the democratic freedoms,“, he added.
Referring to the post-graduate courses fees, Tsipras said that the government puts a halt to the very high tuition fees that increase the income of a small group of professors and on the other hand exclude the possibility to students with low family income to attend the courses. No student will be excluded if he can’t pay. “We also abolish the Administration Committees and restore democracy in the universities, and their self-governance”, Tsipras said.

For his part, the main opposition New Democracy chairman, Kyriakos Mitsotakis said that “the bill you will vote on today will soon be a thing of the past, I pledge that when New Democracy takes the reign of government, we will abolish it.”
Mitsotakis chastised the government’s practice of carrying numerous amendments in omnibus bills in parliament. He also accused the government of “political decay and a decent to authoritarianism.” Even the parliament speaker Nikos Voutsis was not spared from the opposition leader’s accusations, when he named him an “accessory to the parliament’s legislative decay.”
A new round of bickering was launched during both leaders’ second speeches, with the New Democracy leader accusing Tsipras for damaging hesitation in the programme negotiations with the EU institutions. Mitsotakis also accused Tsipras for getting the country on the brink of exit from the EU currency (based on the Varoufakis revelations).  The Greek PM responded by accusing the conservative party of legislating in ways which bypass the parliamentary vote.