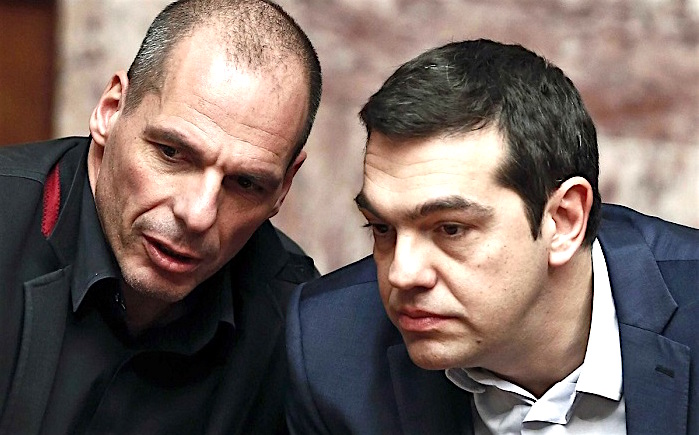 New information is coming to light following the publication of Yanis Varoufakis’ book Adults in the Room: My Battle with Europe’s Deep Establishment. The book will be published in Greece in September.
According to excerpts published by Greek newspaper Proto Thema, Varoufakis and Tsipras had a text message exchange in May 2015 over Wolfgang Schaeuble’s proposal for a temporary exit of Greece from the Euro.
The exchanges apparently took place shortly before a crucial Eurogroup meeting on May 11, 2015 at the height of the crisis in relations between Greece and the EU.
According to Varoufakis, this was the first time that Schaeuble presented the idea of Greece leaving the Euro for a period – a time-out as he called it- in exchange for financial aid.
Varoufakis says that Tsipras was ready to accept the German Finance Minister’s proposal.
He then reveals the actual text messages between himself and Tsipras:
Varoufakis [16.21]: Wolfgang made an incredible pirouette in our today’s meeting.
Tsipras [16.22]: What do you mean?
Varoufakis [16.25]: He sends you a message for a time-out …
Tsipras [16.26]: Does he propose exit or the adoption of parallel currency?
Varoufakis [16.27]: The first through the second: He admits that the Memorandum is destroying us.
Tsipras [16.30]: Then tell him that if he means it, let’s talk about how it could be done under the best possible conditions. Funding, consensus and mutual assistance without bankruptcy.
Varoufakis [16.35]: He offers us tremendous help for the transition. ”
According to Varoufakis, more exchanges followed a little later:
Tsipras [17.50]: I am curious to know what he has in mind. Tell him about the other proposal to see what he thinks.
Varoufakis [17.51]: OK. Do I have the green light to talk with him completely confidentially about all these issues?
Tsipras [17.53]: Yes, but be careful not to give him the impression that you agree. And be careful not to leak it.
Varoufakis [17.53]: OK. Our line is: 1. I speak with him simply to investigate his proposal without any commitment. 2. If it leaks, we will deny it. “