GRNews
GreekReporter.comGreeceLeftist Government in Greece See Those Who Put Them in Power, Turn...

Leftist Government in Greece See Those Who Put Them in Power, Turn Against Them 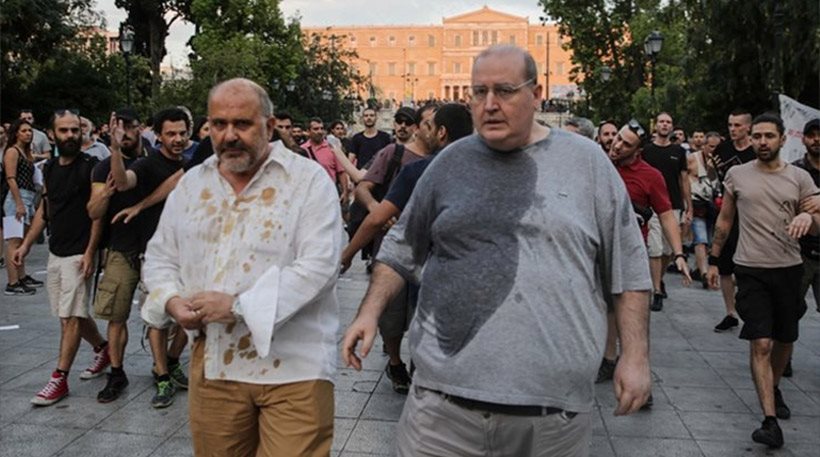 If a picture speaks a thousand words, the picture of the two former Syriza ministers escaping the wrath of the crowd speaks about a million, or a few billion, if one thinks about the billions of Greece’s debt.
The picture of former deputy minister of culture Nikos Xydakis and former education minister Nikos Filis after they have been pelted with water bottles and coffee cups by the angry crowd is sad for many reasons. The fear and disappointment in their eyes is as clear as the failure of the administration to govern.
The two men went to protest against a court decision that denied the release of terrorist suspect Irianna V. who has been sentenced to 13 years in prison on inconclusive DNA evidence. So the presence of representatives of the executive authority in a rally against a decision of the judicial authority is not exactly appropriate. Much less so if the two former ministers knew what would follow, which was extensive vandalism and destruction of public and private property, as 67 storefronts were broken, along with other damages.
According to antiauthoritarian and leftist groups, Irianna is innocent and her jail sentence is unjust. Hence the “Free Irianna” protest rally. According to the court, Irianna might be involved in terrorist acts if she is set free. The two parliament members believe she is innocent and went to the demonstration to show solidarity, and fish for some votes in the process. Because, once upon a time, people who went to these kind of rallies saw Syriza as the upcoming leftist power that would put to practice their Marxist ideals if, and when, elected.
It took two and a half years for the government that came to power on the promise to rid Greece of austerity bailout programs and build a state of justice, welfare and solidarity to realize that they don’t have a clue about world economy and politics, lack the know-how to run a country, and definitely lack the skills to bring the socialist reforms they were promising.
Instead, what Alexis Tsipras and his three cabinets since January 2015 achieved was to bring even more austerity upon crisis-stricken Greeks and rob them of all hope for a better future. It is the exact word, “hope,” that they pledged to bring and now 82 percent of Greeks believe the exact opposite, as a recent poll showed.
Only less than three years ago the two men who were attacked by protesters were urging indignant Greeks to revolt against the previous administration for signing bailout programs accompanied by harsh austerity measures. Tsipras himself was telling Greeks to resist, stop paying the property tax and road tolls.
Then the leftist government proceeded with a campaign to turn Greeks against each other. It was us, the new and promising, against the old, the previous political system. Those who were not leftists or Syriza voters were branded “neoliberals,” “fascists,” “enemies of the people” and so on.
But today, the same leftists who were smashing storefronts and burning cars under previous administrations, now see Syriza as a sellout and have turned against the party and the government. Following the same methods they were urged to use in the past.
So, in essence, what Filis and Xydakis were subjected to on Monday night was the treatment they used to propose for their political opponents in the past. The two Syriza MPs reaped what they sowed in the last few years. Now they are the authority, thereby the enemy of the people. They never condemned these methods of protest in the past, but now they are at the receiving end. Some of their colleagues were even saying that once Syriza is in power Greeks would have nothing to protest against anymore and would never again need to take it to the streets.