Endless Lines at Knossos Palace, Only One Ticket Stand (video) 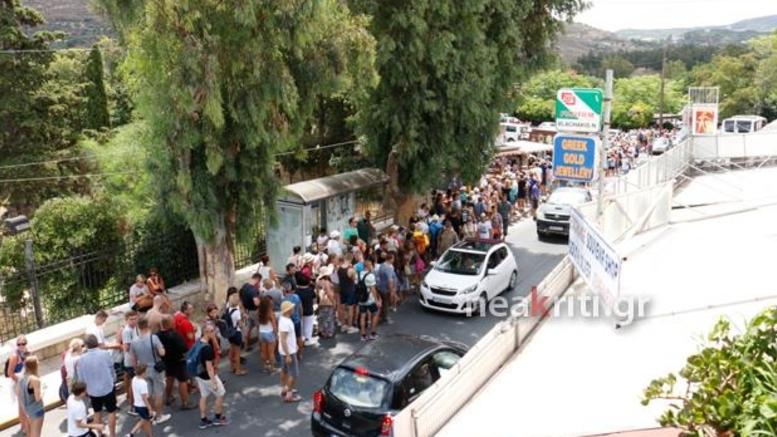 A lot of patience and strong nerves are the two things – other than a hat and a bottle of water (large) – that a prospective visitor of Knossos Palace on the island of Crete needs.
The lines are unbelievably long, running for hundreds of meters outside the archaeological site. Thousands visit the palace every day. The sidewalk is too narrow to accommodate that many people, who literally overflow on the street, forcing tour bus drivers to leave the wheel and play traffic police.
And to service all those people there is only one (1) ticket stand. One wonders there are no scalpers to sell tickets for the archaeological site. Here is an opportunity for unemployed Greeks.
Some visitors get so frustrated that at the end they leave the queue and go back to Heraklion. Young children and the elderly simply cannot stand to wait.
Knossos is the largest Bronze Age archaeological site on the island and is considered to be Europe’s oldest city.
New Democracy MP Lefteris Avgenakis sent a letter to Culture Minister Lydia Koniordou and Tourism Minister Elena Kountoura asking for more staff at the Knossos site and better services for the thousands of visitors who arrive every day.
“In the peak of the tourist season, especially for Crete,”the letter reads, “tourists who visit the archaeological site of Knossos in Heraklion face considerable problems. The image presented by one of the most emblematic cultural sites, the second most visited monument in the Mediterranean, is shameful but also dangerous. There are endless lines of tourists wishing to enter the archaeological site of Knossos. In addition, the necessary infrastructure for the safety of those waiting to enter the archaeological site is absent, as visitors are literally waiting on the road where vehicles pass continuously (cars, trucks, coaches) at the risk of their lives.”