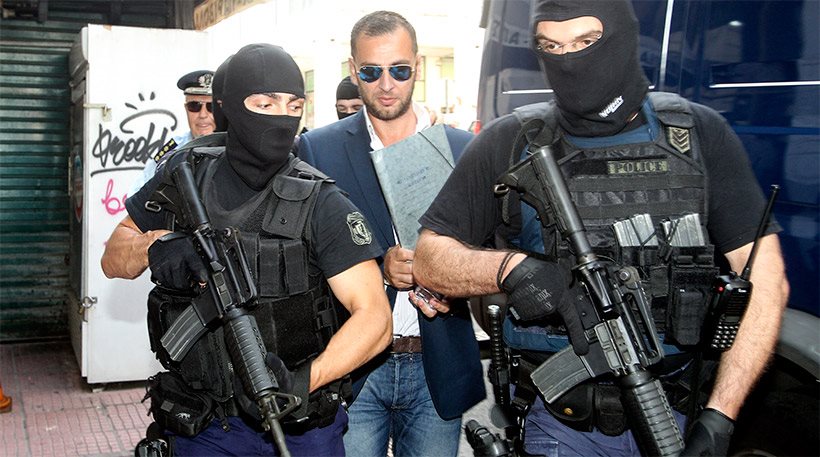 Convict for major drug case Makis Yiannousakis told judges that he will leak more telephone conversations he had with Defense Minister Panos Kammenos.
Yiannousakis — who is serving a life sentence for his involvement in a huge shipment of heroin in 2014 — appeared in the appeals court on Monday asking to be released from prison because there were two murder attempts against him in prison, and that his family has received threats as well.
The convict alleges that the defense minister called him repeatedly on the telephone in prison and asked him to testify against shipowner Vangelis Marinakis in connection with drug ship Noor 1. However, no charges have ever been filed against Marinakis. The businessman told judges that he will make public more telephone conversations he had with Kammenos.
“I recorded every one of them because I wanted to expose them,” Yiannousakis told the court, saying that he had been blackmailed by a coast guard official to testify falsely against Marinakis and, after refusing, Kammenos started efforts to persuade him, and did so on several occasions.
Drug case creates political scandal
The defense minister came under fire from main opposition New Democracy in parliament on Monday. Party leader Kyriakos Mitsotakis asked under what authority a minister gets involved in the work of justice and holds several conversations with a convict, with the last one being 21 minutes long.
Mitsotakis also asked why a convict has a mobile phone in prison and is conversing with a government official, especially for a case for which the courts have decided in 2015 and have convicted the businessman. He finally asked if the prime minister is aware of Kammenos’ act.
Kammenos defended himself saying that it is his duty as a cabinet member to seek justice and protect the interests of Greek people. He accused Mitsotakis of trying to protect shipowner Marinakis.
Prime Minister Alexis Tsipras also defended Kammenos saying that this was the biggest drug case in Europe — two tons of heroin — and it is Kammenos’ duty to be involved in shedding light in the case. Justice Minister Stavros Kontonis also took the side of the defense minister, accusing New Democracy of trying to protect the shipowner.
Kammenos is president of the right-wing Independent Greeks party, junior partner in Greece’s coalition government. The party’s nine MPs along with Syriza’s make for a slim majority of 153 seats in the 300-member Greek Parliament.