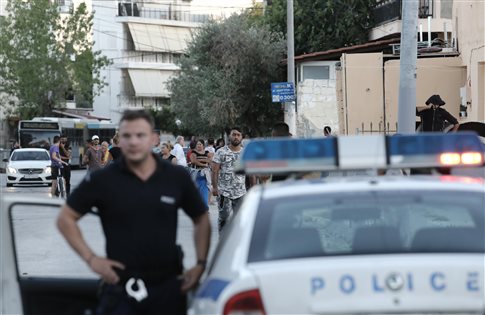 Hellenic Police on Monday launched a massive operation in Menidi, Attica and arrested 26 people involved in various crimes.
The operation that started at 7:45 am took place around the former Kapota army camp, which since 1999 hosts several families who lost their homes during that year’s destructive earthquake.
In recent years the area has been crime-infested, with mostly Roma gangs involved in all kinds of criminal activities such as drug trafficking, weapons possession, robberies, theft, forgeries, contraband and other unlawful acts.
Other than the drugs and weapons confiscated, police found many cannabis seedlings close to the camp.
Men from all police agencies participated in the operation while a helicopter was flying above the area to coordinate the operation and monitor activities.
The operation is in response to a June incident when a stray bullet fired in the air by a Roma man took the life of a 11-year-old student during a gymnastics exhibition in the nearby school.
The fatal incident angered area residents who protested against the death of the child and the ongoing criminal activities. The residents accused police that they are afraid to tackle the issue because the Roma gangs carry guns and are dangerous.