TechNews
GreekReporter.com Greece New Center-Left Party to Be Formed by December in Greece

New Center-Left Party to Be Formed by December in Greece 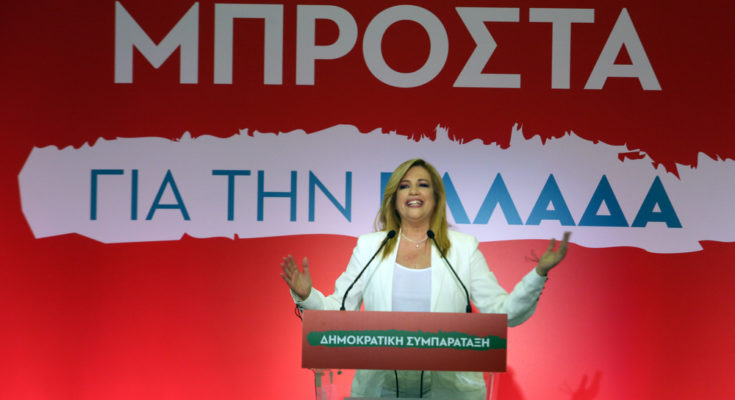 Democratic Coalition and PASOK chief Fofi Gennimata on Friday asked for elections as soon as possible “so that the country gets rid of Syriza and its catastrophic policies”.
Gennimata was addressing a wide audience in the opening speech of the Democratic Coalition three-day convention held at Peace and Friendship Stadium in Athens.
The Democratic Coalition is composed of PASOK and the Democratic Left. The two-party coalition seems to be gaining momentum as recent polls indicate.
The PASOK chief announced that before December a new center-left party will be formed. The chief of the new party will be elected in October, through open and tramsparent procedures she said. She also ruled out any possible cooperation with SYRIZA.
To this end, she proposed the establishment of an independent Ethics and Procedures Certification Committee headed by Professor of Constitutional Law, Nikos Alivazatos. This committee, as Gennimata stressed, will undertake the oversight and guarantee the credibility, transparency and fairness of the course towards the election of leadership and the founding conference of the new progressive party.
In her speech, the PASOK president criticized the government’s failures and ethics. “Mr. Tsipras exploited the crisis with monumental populism and demagoguery to rise to power, mitigated the values ​​of the Left and betrayed the progressive citizens who trusted him,” she said.
“They will be defeated in the elections in a deafening way,” Gennimata pointed out and stressed that, “The solution for the country’s problems passes through elections. Elections that the opposition can not bring forth. The sooner this government leaves, the better.”