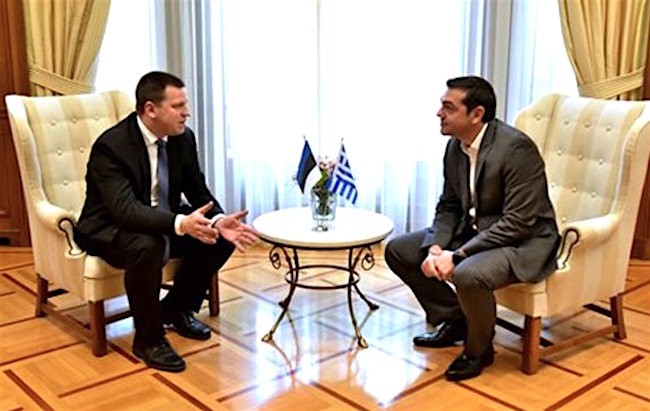 The Greek government is striving for a comprehensive solution on June 15, Prime Minister Alexis Tsipras told reporters on Monday, after a joint press conference with Estonian Prime Minister Jüri Ratas and their meeting at the Maximos Mansion.
A solution must come and “the sooner the better,” the prime minister replied to reporters, when asked if this would happen at the Eurogroup on June 15 or the European leaders’ summit on June 22.
“We hope for a solution within June, before Estonia takes over the presidency [of the Council of the European Union] for a final settlement on a reduction of the Greek debt,” he added.
During the meeting with the Estonian premier, the main issues on the agenda were bilateral relations and the Estonian presidency of the Council of the European Union in the second half of 2017. They also discussed the Cyprus issue, the situation in the Balkans and the refugee crisis.
(Source: ANA-MPA)

Each year, hundreds of people gather on Mount Olympus for the annual Promitheia festival dedicated to the Ancient Greek spirit.
Animals