May Day Rallies and Marches Held Throughout Greece 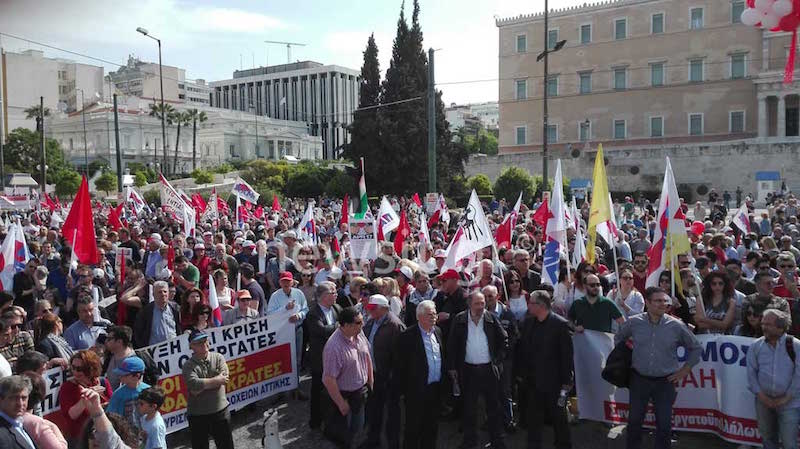 Trade unions and organisations marked the May Day labour holiday on Monday with marches and rallies held in cities around Greece. They stressed the need to fight for and defend fundamental labour rights rolled back under memorandum policies.
The General Confederation of Employees of Greece (GSEE) and the civil servants’ union federation ADEDY – representing the majority of unionised workers in Greece – held a joint rally in Athens’ Klafthmonos Square, followed by a march to the Greek Parliament.
Speakers at the event stressed that workers were facing “new harsh and painful measures,” which the government was currently preparing to vote for and implement, and which will further increase unemployment and levels of poverty among Greeks. GSEE and ADEDY also called on workers to join a 24-hour general strike on May 17, “in order to give a clear answer to the barbaric and dead-end policies.”
Other rallies were also taking place in central Athens to mark May Day, with the participation of trade unions, organisations, students and anti-authoritarian groups.
A separate march and rally was also held by the PAME trade union group affiliated with the Communist Party of Greece (KKE), which gathered in Syntagma Square and was addressed by the Palestinian Authority Ambassador in Athens Marwan Toubassi and PAME Executive Secretariat member Giorgos Perros.
Rallies and marches to mark May Day were also held in the northern Greek city of Thessaloniki, the second-largest city in Greece, with protestors calling for an end to poverty, unemployment and austerity policies. The head of the Thessaloniki Labour Centre Panagiotis Tsaraboulidis urged those present to join in efforts over the next two weeks to “block as much as we can the memorandums” and the policy choices of the lenders and the Greek government.
A separate rally was also organised by PAME in front of the Venizelos statue in Thessaloniki, addressed by PAME Executive Secretariat member Leonidis Stoltidis, followed by a march ending at the crossroads of Egnatia and Venizelos roads, the former location of the Worker’s Monument.
May Day marches and rallies were also held in Patras, the third-largest Greek city, Agrinio, Messolonghi, Pyrgos, Aigio, Nafpaktos, Chania and Iraklio in Crete, and Larisa.
(source: ana-mpa)