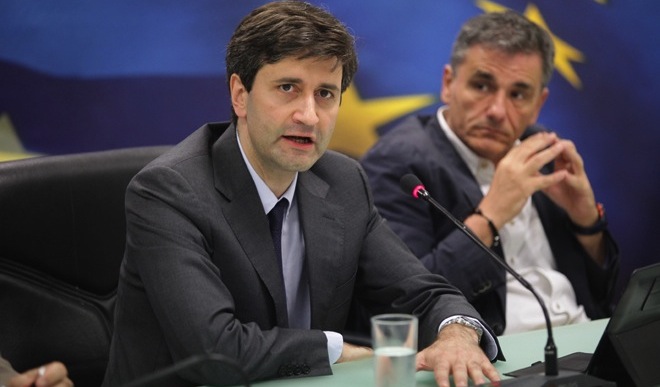 Finance Minister Euclid Tsakalotos and Alternate Finance Minister George Chouliarakis on Thursday will depart for Washington where the 2017 spring meetings of the World Bank Group and the International Monetary Fund will take place. The Greek ministers hope that a compromise between the Europeans and the Fund on the debt issue will be reached on the sidelines of the meetings.
Greece is expected to focus on the 2016 primary surplus which is seen over 3.5% of GDP.
During the contacts in Washington, the green light is expected to be given for the return of the institutions in Athens next Monday-Tuesday so that the staff level agreement is concluded and the overall package (measures, offset measures, primary surpluses, medium-term measures on debt) gets well on track.
According to the government roadmap, the next steps are:
1. Conclusion of the staff level agreement (SLA) that includes reforms as well as negative and positive measures for 2019-2010.
2. Determination of the medium-term measures on the debt that will be implemented after the end of the programme (September 2018). The measures on the debt and the IMF debt sustainability analysis are a necessary precondition for the Fund’s participation in the programme.
3. After the implementation of the medium-term measures on the debt, the measures and the offset measures provided in the Malta agreement of April 1 will also be implemented.
The government’s aim is to have everything concluded by the Eurogroup on May 22 (including the medium-term measures on the debt) so that the road opens for the participation in the ECB quantitative easing programme.
(source: ana-mpa)