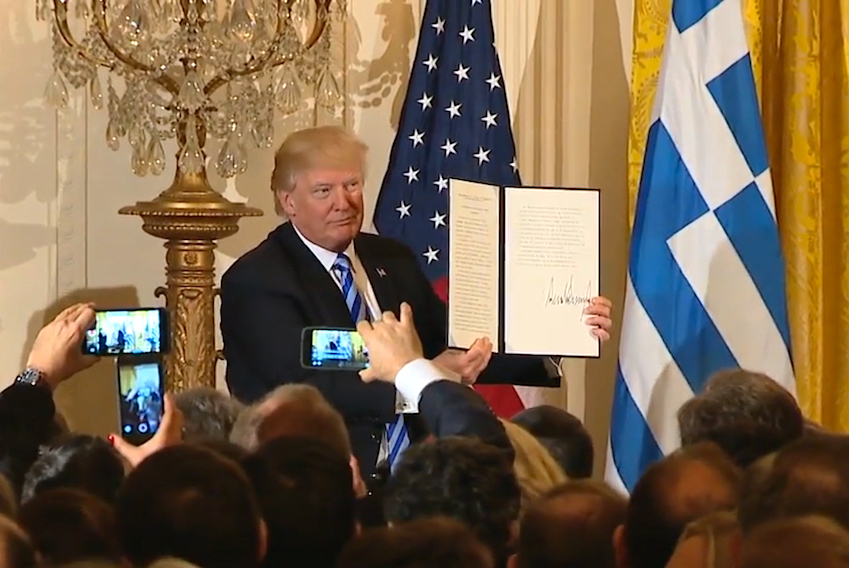 “I love the Greeks” were the first words of President Trump hosting his first Greek Independence Day celebration at the White House, Friday March 24. The celebration was first started by President Reagan and has become a White House tradition ever since.

Hundreds of Greeks and Greek Americans attended the event to honor the men and women who fought for Greece’s Independence against the Ottomans as well as the bond between USA and Greece. The night before, another celebration was hosted by the Greek-American White House Chief of Staff Reince Priebus, and was also attended by distinguished guests, among them Vice President Pence.

Although this year the White House went as Greek as it gets – with music, dancing and of course Greek food – some of the best entertainment came from President Trump himself as he was greeting the cheering crowd.

Trump also signed a proclamation paying tribute to the Greek revolution that started on March 25th 1821 and resulted in Greece’s liberation.

Watch the full video from the event – the President’s remarks start at 3:18.

Full transcipt of the President’s remarks at the East Room

Thank you very much, Reince.  Very much appreciated.  Reince was the most successful leader the RNC — that’s called the Republican National Committee — has ever had.  And now, as my really terrific and hardworking Chief of Staff, he has really one of the number-one — and I guess you’d have to say, he’s one of the top Greeks in the country.  And I know a lot of them right in the audience — they’re my friends.  (Applause.)

And the list also includes, as you know, George Gigicos — (applause) — George.  George is great.  I said, make sure that microphone is absolutely perfect, George.  He never lets me — the Director of White House Advance.  And George Sifakis — (applause) — where’s George?  And these guys are with me right from the beginning — the Director of the Office of Public Liaison.  It’s a great team.  It’s a great, great team.  Can’t do any better.

Your Eminence and Father Alex, it is a true privilege to host you at the White House.  I was deeply honored to have you both at my inauguration — it was a great day — and I am grateful for your presence here today.  I also want to thank you for awarding Reince and George the highest honor of the Greek Orthodox Archdiocese of America — the Medal of Saint Paul.

This love of freedom and democracy has formed a lasting bond between our two countries.  It is a bond that has its origins in Ancient Greece — “the birthplace of Democracy.”

American President James Monroe and the great American statesman Daniel Webster both supported Greece’s struggle for independence.  And it was a tough, tough struggle, you know that.  Then-Representative Webster honored the role of Greece in forming civilization, and said that “We, like the rest of mankind, are greatly her debtors.”

In years to come, we don’t know what will be required to defend our freedom, but we do know that it will demand great, great courage — a courage from all of us — and we will show it, and I have no doubt about that.

Drawing inspiration from our history and those who come before, we will rise to any occasion.  We have a country that, as you know, has certain difficulties, has certain problems.  We will solve those problems and we will quickly solve those difficulties.  Just watch.  (Applause.)

I want to thank you all for coming to the White House today.  We celebrate Greek history, and we applaud the tremendous contributions of your people to our beloved country.

May God bless you all.  And with that, I would like to recognize His Eminence.  Thank you very much.  Thank you.  (Applause.) ”